Three USC School of Architecture students, competing against teams from seven other design schools, won the first Julius Shulman Emerging Talent Award for their plan to revitalize the 40-acre Ports O’Call complex at the Port of Los Angeles.

The new award, which came with a $5,000 prize, was sponsored by the design firm Gensler and was one of 33 projects celebrated at the annual L.A. Architectural Awards hosted by the Los Angeles Business Council. The accolades were given in late June at an event at the Beverly Hilton Hotel that drew more than 500 people.

It was fitting that a USC team won the award named after the late architectural photographer Shulman, a longtime friend of the School of Architecture, who spoke at the school often and regularly invited groups of students to his Raphael Soriano-designed home in Los Angeles.

USC student architects Bryn Garrett, Samantha Ng and Evan Shieh competed against other three-person teams from the Art Center College of Design, the Otis College of Art & Design, the University of California, Los Angeles, the Southern California Institute of Architecture, Cal Poly Pomona, the University of California, Long Beach, and Woodbury University. Over an intensive weekend in February, each team developed concepts to overhaul the Ports O’Call complex, part of a 400-acre, 8-mile-long waterfront in San Pedro.

Titled “Urban Cascade,” the USC design “encourages new energy along the waterfront by promoting street life and new retail activity, along with waterfront residential areas that help connect the site to the rest of San Pedro,” according to the project description, which also stated, “Additional public amenities such as a water park, skate park and exercise areas add vitality and a greater sense of community along the retail boardwalk.”

Garrett said the team designed “Urban Cascade” in two phases. “We wanted our idea and concept to be clear in the first phase so even if the second phase doesn’t get developed, it’s still a really nice project,” he said at the time of the competition.

A jury of 20 notable building and design professionals, led by Joseph DeTuno of Next Century Associates, selected the award winners. 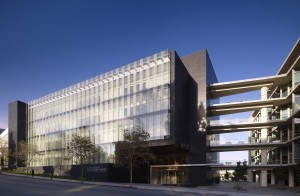 The Eli and Edythe Broad CIRM Center for Regenerative Medicine and Stem Cell Research won the Sustainability Award at the L.A. Architectural Awards.

Recognized with a Sustainability Award was the Eli and Edythe Broad CIRM Center for Regenerative Medicine and Stem Cell Research at the Keck School of Medicine of USC. Designed by ZGF Architects, the 91,485-square-foot building is the first LEED Gold-rated research laboratory building on the Health Sciences Campus.

Of the Broad Center, the award description stated: “The minimalist quality of the design — expressed by the firmness of black granite, stainless steel and transparent glass resting on an earthy platform of flagstone — sets the stage for the building’s collaborative scientific environment. The scientist occupants are performing highly collaborative research; therefore, it was an established imperative that the design would maximize the laboratory functional flexibility.”

The Los Angeles Business Council has hosted the L.A. Architectural Awards for the past 42 years. The purpose of the awards is to celebrate a diverse range of innovative architecture and design projects throughout Los Angeles County. Awards are given to a wide range of project types, including new construction, renovations, building interiors, landscape architecture, green and sustainable designs.

Seventeen sports equaled or exceeded their previous scores. A team’s Academic Progress Rate accounts for eligibility, retention and graduation to generate a measure of academic performance.