The USC Shoah Foundation Institute has completed a multiyear, multimillion-dollar project to digitally preserve the video interviews of Holocaust survivors and other witnesses in its visual history archive. The archive contains testimony from nearly 52,000 individuals.

“The completion of this effort is one of the most significant milestones in our 18-year history,” said Stephen Smith, executive director of the institute. “It helps guarantee that survivors’ voices will be heard, that their faces will be seen and that their memories will endure for generations to come.”

The institute recorded the testimonies on 235,005 Betacam SP videotapes between 1994 and 1999. All physical media-storage formats experience data rot at some point in time; conservative estimates give shelf lives of 50 years for film, 20 years for videotape and five years for hard drives before visual content shows signs of age-related damage.

In 2008, with funding from the USC Office of the Provost and Oracle, the institute began processing the tapes to generate copies in a digital format called Motion JPEG 2000, which captures the picture and sound quality of the master recordings. 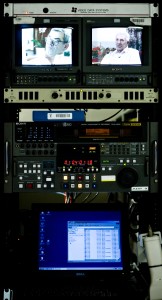 A testimony being processed for digital preservation (Photo/Kim Fox)

“The advantage of a digital archive is that we can constantly monitor for data rot and make corrections as soon as any errors are detected,” said Sam Gustman, the institute’s chief technology officer. “We now have multiple digital copies of the archive at [USC], and we’ve mirrored an additional copy to a ‘cloud’ storage provider outside California’s earthquake zone. Our goal for digital preservation is to make certain that the testimonies will be available in perpetuity.”

In addition to generating Motion JPEG 2000 duplicates of the testimonies for preservation, the institute generated other copies in commonly used formats, such as MPEG, QuickTime, Flash and Windows Media Player, so that more people can access the visual history archive.

Digitization has also led to the development of IWitness, an online resource that allows teachers and students 13 and older to interact with more than 1,000 testimonies.

Now in beta, IWitness offers a variety of ways to integrate Holocaust-survivor testimony into curricula. Teachers can use video clips for classroom lessons or develop their own activities, and students can use IWitness for homework. It can even be incorporated into a semester-long learning experience that involves classroom activities and student-authored video projects. The American Association of School Librarians named IWitness one of the 2012 top 25 websites for teaching and learning.

Established in 1994 by Steven Spielberg to collect and preserve the testimonies of survivors and other witnesses of the Holocaust, the Shoah Foundation Institute maintains one of the largest video digital libraries in the world, with testimonies in 32 languages and from 56 countries.

Part of the USC Dornsife College of Letters, Arts and Sciences, the institute aims to overcome prejudice, intolerance and bigotry — and the suffering they cause —through the educational use of its visual history testimonies.

In addition to preserving the testimonies in its archive, the Shoah Foundation is working with partner organizations to expand the archive with accounts of survivors and witnesses of other genocides.

Executive Director Stephen D. Smith will step down at the end of 2021 but continue to serve the institute as executive director emeritus.