Three members of the USC Price School of Public Policy’s class of 2012 will put theory into practice in new positions at departments within the federal government.

As Presidential Management fellows, they will work as federal government employees for two years and may be hired as full-time employees at the end of the term. They also have opportunities for accelerated promotion, as well as formal classroom training and a four- to six-month developmental assignment.

Of the approximately 9,000 students who competed for fellowships this year after being nominated by their universities, roughly 640 became finalists based on the results of an entrance exam and an in-person interview. The finalists attended a three-day federal job fair in Washington, D.C., where more than half of them received placements.

Shepherd was delighted to be among those hired at the job fair. At the U.S. Department of Housing and Urban Development (HUD), he will serve at the GS-9 level as a housing program policy specialist, responsible for developing, implementing and reviewing the effectiveness of single-family housing program policies and procedures.

“I’ve always been interested in housing,” he said. “So I was very happy to get this position — I wanted to get into HUD.” 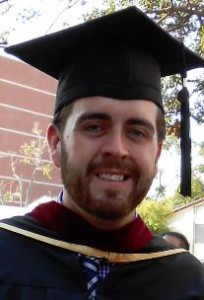 After graduating with a degree in political science from The University of the South in Sewanee, Tenn., Shepherd spent two years working with City Year, a nonprofit AmeriCorps program. He helped senior citizens and other homeowners with simple repairs, and he oversaw community service projects.

While at USC Price, he concentrated his studies in transportation.

“My greatest interest would actually be combining transportation and housing together,” he said. “The good thing about the PMF is you can do rotations and build relationships with other people in different departments, so I hope to do a rotation either in community planning and development or maybe even look outside the agency.”

Trombley accepted a GS-11 offer as a budget policy analyst at the U.S. Department of Education.

This won’t be Trombley’s first experience in education or in Washington, D.C. He ran an Academic Games program at Tappan Middle School in Ann Arbor, Mich., while obtaining a bachelor’s degree in history from the University of Michigan. He then spent three years on Capitol Hill working for Reps. Charlie Wilson, Joe Sestak and Bart Stupak. As a volunteer at the Washington Scholars Fellowship Program, he helped to place recent public policy college graduates in internships in the nation’s capital.

While earning his master’s degree at USC Price, Trombley continued to develop his interest in education, working as a research assistant with the Center on Educational Governance at the USC Rossier School of Education and serving as a 2011 Los Angeles Education Pioneers Research fellow.

“He did a lot of projects on education questions during his time here,” said Professor Gary Painter, director of graduate programs in public policy at USC Price. “He was a good candidate for the PMF program because of his strong academic credentials, and my sense is that he is just a good fit for the types of jobs that he will be doing at the Department of Education. He’ll be using some of the skills he learned at USC Price in his position there.”

Budhwani also credited USC Price with preparing her for the PMF program. She’ll work at the GS-9 level as a foreign affairs officer at the Department of State, where she previously interned. Her job will involve developing budgets and strategic plans for the Bureau of African Affairs.

“It’s in the field that I always wanted to be — international affairs,” she said. “It also allows me to use my policy evaluation course work, not just the experiences I’ve had.”

Born in Pakistan and raised in Atlanta, Budhwani earned her bachelor’s degree in psychology and linguistics from Emory University. She served in the Peace Corps in Kyrgyzstan, where she taught English and worked at a nonprofit focused on sanitation and hygiene issues. Upon her return to the United States, she lent her talents to the nonprofit Hands On Atlanta, which promotes volunteer service and civic engagement, through AmeriCorps. During her first semester of graduate school at USC, she heard about the PMF program and made plans to apply.