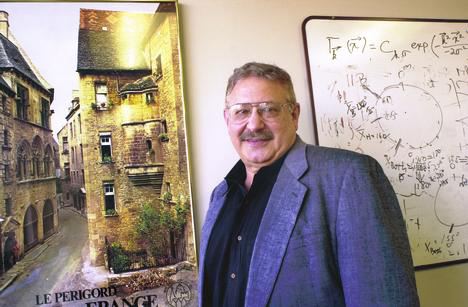 Neuroscientist Irving Biederman stands in his office, where, he says, most of us would look at the French poster as opposed to the lines on the blackboard — “except, of course, if you are a neuroscientist.” Biederman, the Harold W. Dornsife Professor of Neuroscience, offers a theory to explain how we cast our attention on our surroundings.

“Beauty is in the eye of the beholder,” goes the old cliché. Poetic, to be sure, but hardly exacting enough for the tastes of neuropsychologists.

Computer science and psychology professor Irving Biederman might rephrase it, “the pleasure of perceptual novelty and richness is in the opiate receptors of the cerebral cortex.” Not nearly as pithy, to be sure. But Biederman’s new theory might go a long way explaining how we cast our attention about our surroundings and why we find one thing more ‘interesting’ at first blush than another.

“The deep question here,” said Biederman, who is the Harold W. Dornsife Professor of Neuroscience in the USC College of Letters, Arts and Sciences, “is how to account for our motivation when we’re not worried about our immediate survival or focusing on a specific search task, like hunting for our car keys. This is about 95 to 99 percent of the time for most human beings.”

He will be presenting the theory at the annual Vision Sciences meeting in May.

Biederman proposes a simple mechanism by which the brain seeks to “maximize the rate at which it acquires new but interpretable information.”

His idea rests on the observation that in the cerebral cortex – the brain’s voluminous outer envelope where our highest levels of cognition are based – enkephalin-releasing cells are distributed in a gradient. (Enkephalins are one of the brain’s own natural opiates, the neurochemical basis of pleasure.)

These “pleasure cells,” as they might be called, are sparse in the primary sensory areas where very basic perceptual information such as lines, edges and simple tones are processed. They grow more numerous as information proceeds through higher processing levels, where we experience things like shape, pattern and texture. And they are densest in the so-called association areas, where complex and meaningful things like faces, objects, voices and melodies are represented, and where our perceptions get associated with past experience.

Biederman’s idea is that the more pleasure cells that are activated at once, the more little subconscious, attention-grabbing pings of pleasure we get. And because these pleasure cells are densest in the association areas, our attention is automatically biased toward complex percepts that have the most meaning.

So for example, an abstract tangle of colors is less eye-catching than a street café scene of equivalent visual complexity. The reason is that the street scene engenders a greater sum-total of activation in the pleasure cell-rich association areas, while the abstract image only percolates up to intermediate levels of visual processing where there are fewer such cells.

“There has been no theory like this yet,” said Biederman. “People have speculated about things like curiosity, but typically the work just crashed because of the vicious circularity. People always had to assume that what’s interesting is what people are interested in, and they couldn’t break out of it.”

The elegance of this idea is that it accounts for something mysterious – what’s interesting? – based on a relatively straightforward summation of how many pleasure cells a perception causes to fire.

“One thing this theory has going for it is that it’s so simple,” Biederman said. “In cognitive neuroscience we keep finding dumb mechanisms doing smart things. And here’s a really dumb mechanism: Your preference for some experience is related to the amount of activity that’s created in certain brain areas. It keeps us so efficiently attuned to the world, in a way that feels really intelligent, yet it’s so simple.”

Biederman said this theory also explains our taste for novelty and why conversely – to use another cliché – familiarity breeds contempt. It rests on an additional principle of brain organization called “competitive learning” – the fact that as the cortex gets more familiar with something, it uses fewer cells to “encode,” or represent it.

Thus, something novel activates large swaths of the cortex, firing lots of pleasure cells and making a strong bid for our awareness. But as we experience the thing more, fewer cells are devoted to representing it. This results in fewer pleasure cells firing and a consequent lessening of its tug on our conscious attention.

Biederman’s theory has a number of other interesting ramifications, such as why we find fast-cutting sequences on MTV and “Sesame Street” pleasurable: So long as they aren’t incoherent, they up the rate at which the association areas are getting stimulated.

It also explains why we are loath to use the same noun or pronoun over and over again in our sentences, Biederman said.

“Let’s say you’re talking about your car,” he explained. “First you say ‘my car,’ then ‘it,’ but then if you have lot to say, you start to call it a vehicle, a Mercedes and so on.

“We do this even though it increases the risk that we’ll lose the listener or the reader, because if the novel reference is too oblique, they could lose the thread. But you’ve exhausted the enkephalin hit from ‘car.’ So by varying the surface form of the referent, you create little problems for them to solve” – engaging new bits of the cortex, giving them an extra little zap of pleasure to keep their interest up.

While Biederman’s theory neither aspires nor pretends to be a full account of attention or aesthetics, it does boldly claim to capture many key aspects of our casual, workaday attention.

“We’re really junkies for this enkephalin cocktail,” he said.

But for those who relish mystery, there’s still plenty of room left for beauty in the eye of the beholder. And unless neuroscience comes up with some really big surprises, what each of us finds fascinating may always be a matter of taste.

Beauty Lies in the Pleasure Cells of the Beholder, Says Neuroscientist