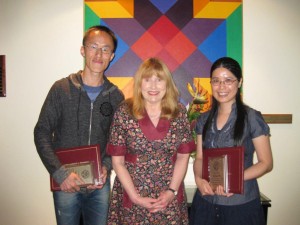 Two doctoral students at the USC Dornsife College of Letters, Arts and Sciences were awarded the Graduate Student Prize for Excellence in Research from the USC Center for Applied Mathematical Sciences (CAMS) for contributions to the fields of mathematics and physics.

Yang Huang of mathematics and Wan-Jung Kuo of physics were selected among 13 nominees across USC schools and departments, including molecular and computational biology, computer science, physics, linguistics and mathematics.

The CAMS Prize was initiated in 2010 to highlight the quality and significance of student research with a substantial mathematical component. Currently the awards are partially funded from several donations, including one by USC Dornsife Professor Emeritus of Mathematics Edward Blum.

Selected by the CAMS’ board of directors, each recipient was honored with a plaque and $1,000 during a ceremony held in April.

“The nominations we had were all remarkably strong candidates,” said Susan Friedlander, professor of mathematics. “We believe it’s important to recognize the work of excellent graduate students.”

Since his arrival at USC from China in 2007, Huang has worked with Ko Honda, professor of mathematics at USC Dornsife. He conducts research in three-dimensional contact topology and Heegaard Floer homology, both of which are sophisticated tools used to analyze knots and three-dimensional spaces. Huang’s findings may provide a better understanding of knotting phenomena in quantum computing and molecular biology.

“As topologists, we want to find a mathematical way to understand different shapes,” Huang said.

According to Honda, “Yang has made substantial progress toward understanding and clarifying certain aspects of contact structures in three-dimensional spaces.”

Huang, who received his Ph.D. in mathematics at this month’s Commencement, will continue his research at the Max Planck Institute for Mathematics in Germany.

Working with Daniel Lidar, a professor at USC Dornsife and the USC Viterbi School of Engineering, Kuo has conducted research in quantum information processing. She has worked with Lidar, who serves as the scientific and technical director of the USC-Lockheed Martin Quantum Computing Center.

Kuo, a native of Taiwan who also earned her Ph.D this month, will continue her research at Iowa State University.

“I’m honored to receive this award,” she said.

A keen sense of science