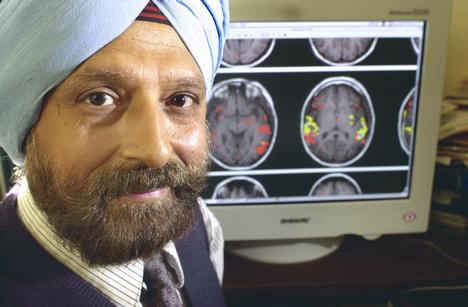 Manbir Singh, a professor of radiology at the Keck School of Medicine of USC, and colleagues used functional magnetic resonance imaging to scan the brains of normal hearing people while they read lips off a video presentation. The yellow areas in the scans show the primary auditory cortex; the red areas are the associative auditory area.

The brain’s primary auditory cortex is activated only by the actual hearing of sounds and not when people read lips, according to a new functional brain imaging study by USC and the House Ear Institute.

This contradicts a previous report published in the journal Science, said lead researcher Manbir Singh, a professor of radiology at the Keck School of Medicine of USC with a joint appointment in the USC School of Engineering’s department of biomedical engineering.

“The report in Science claimed that silent lipreading localized in the same brain areas as spoken words, including the primary auditory cortex,” Singh said. “We thought that didn’t make sense.”

Singh and his colleagues used functional magnetic resonance imaging (MRI) at the LAC-USC Imaging Science Center to scan the brains of normal hearing people while they read lips off a video presentation.

“With our very first subject, we could see that lipreading activates not the primary auditory cortex, but associative regions,” Singh said.

Associative regions of the cortex process semantically rich, complex representations and language and are not the province of a single sensory modality. The areas that the new study found to be active during lipreading are areas that respond to words regardless of whether they are heard, read or signed, Singh said.

But the study indicates that the brain is not somehow feeding those word judgments back to the primary auditory cortex, which is where the cortex first starts analyzing the basic acoustic properties of things we hear.

Investigators from the House Ear Institute approached Singh to help run a series of functional MRI experiments to understand how the brain processes lipreading and finger spelling and how the brains of the congenitally deaf organize differently from hearing brains.

The new study, which will be published in the March issue of the journal NeuroReport, is to be the first of many experiments to explore these issues. It was funded by the House Ear Institute and supported by the Neuroimaging Core of the NIH-funded Alzheimer’s Disease Research Center at USC.