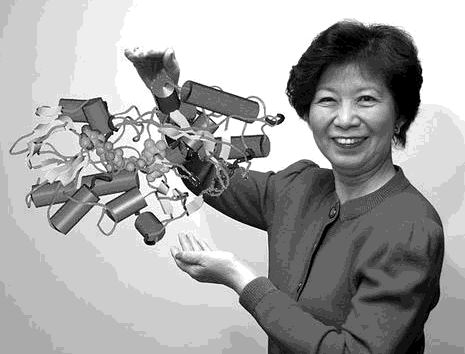 University Professor Jean Chen Shih has studied the vital, multi-talented brain enzyme monoamine oxidase (MAO) for most of her distinguished career, but only recently did she get to look at her subject for the first time.

Shih and her collaborators are the first to have modeled the molecule’s three-dimensional structure and the first to have worked out the key amino acids involved in MAO’s active sites, which they reported in a recent series of three papers in the Journal of Biological Chemistry.

This discovery is a key step toward understanding MAO well enough to start designing drugs that specifically modify its action – a goal that is dear to psychopharmacologists, who expect it will have several important applications: better antidepressants, a deeper understanding of anxiety and aggression, treatment for Parkinson’s disease and perhaps extending cell lifespans.

This is only the latest in a series of MAO-related firsts achieved by Shih, who is the Boyd and Elsie Welin Professor of Molecular Pharmacology and Toxicology at the USC School of Pharmacy and holds a joint appointment with the Department of Cell and Neurobiology at the Keck School of Medicine.

MAO was first isolated in 1942 and first shown to come in two forms, MAO A and MAO B, in 1962. In 1988, Shih’s group was the first to find the full amino-acid sequence of both MAO forms and was the first to identify its genomic structure and regulatory elements. Now the researchers have shown the key amino acids in the active sites and arrived at a 3-D model of both MAO A and B – critical for understanding its functions.

MAO’s main role in the brain is to break down several neurotransmitters – the chemicals that nerve cells use to communicate. Neurotransmitters are the central constituents of emotion, perception and thought. MAO specializes in the breakdown of the monoamine neurotransmitters: serotonin, important to mood, depression and the sleep-waking cycle; dopamine, central to addiction, feelings of reward and Parkinson’s disease; norepinephrine, also important in mood as well as regulating blood pressure; and phenylethylamine—another important mood regulator.

MAO A deals primarily with serotonin, dopamine and norepinephrine, while MAO B mainly breaks down phenylethylamine – though, in another study, Shih also demonstrated that each can perform the other’s duties under certain circumstances.

Shih also performed a series of in vivo experiments, creating “knockout” mice that lacked one or both of the MAO genes. MAO A knockout mice were unusually aggressive, while MAO A-B “double knockout” mice showed both aggression and pronounced anxiety.

“This tells us that anxiety and aggression are regulated by similar neurotransmitter pathways,” said Shih, noting that this may bear importantly on the fact that some antidepressants work by specifically targeting MAO production.

MAO B knockout mice, for their part, offer promising insights into Parkinson’s disease – a progressive, dopamine-related brain disorder that degrades motor faculties and leads to neurodegeneration.

The brains of MAO B knockout mice metabolize certain neurotoxins differently than normal mice, Shih found, which protects them from acquiring Parkinson’s disease. This provides an animal model to study the molecular basis of neurodegenerative diseases, Shih said.

The list of Shih’s discoveries on MAO goes on. She is one of very few scientists to have been twice recognized with the coveted MERIT Award from the National Institutes of Health and was the first woman to receive the Volwiler Research Achievement Award from the American Association of Colleges of Pharmacy.

“This enzyme has many different functions and acts on so many different pathways,” said Shih. “It was recently found that MAO A expression increases significantly in prostate cancer cell lines. And it was recently shown to play a role in cell death, and that inhibiting MAO can inhibit cell death. So that’s a whole new direction for MAO research. Actually, that’s why I choose to work with MAO; it’s very distinctive and unusual. It’s interesting that one enzyme can take up many scientists’ whole lifetimes and still bring surprises.”

One little enzyme has given Shih a ‘life of surprise’