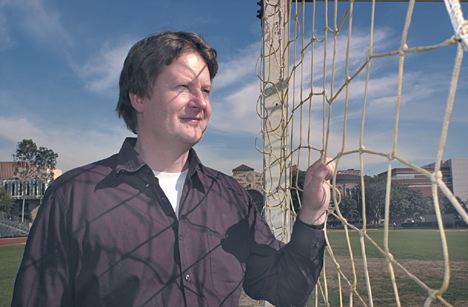 Geert Ridder, a native of the Netherlands, has joined the USC economics department from Johns Hopkins University. Ridder has predicted outcomes of major soccer tournaments using a database to assess team strengths and simulate matches.

Geert Ridder can’t peacefully watch a soccer game – or any sport for that matter – without thinking about bigger things, like statistics and econometrics.

From player violations and coaching styles to attendance at league matches, the USC economics professor looks at how certain practices in soccer may statistically help or hurt a team.

“Sports produces a lot of numbers,” said Ridder, who was wooed to USC’s College of Letters, Arts and Sciences last year from Johns Hopkins University. “To extract information from those numbers requires models.”

And econometrics – the application of statistical techniques to the analysis of data – is well suited for the task.

Ridder, a native of the Netherlands, has successfully predicted outcomes of major soccer tournaments like the World Cup using a large database to assess the strength of teams and simulate matches.

“Even the highest ranked team has only an 18 percent chance of winning the entire tournament,” said Ridder. “Soccer is a low-scoring game and the strong teams sometimes face upsets.”

Sports predictions are only one of Ridder’s specialties.

“I’m not so interested in abstract research,” said Ridder, who describes himself as an empirical economist. “Most of my work involves real-life situations and assessments.”

The explosion of computational resources has generated an abundance of data, making it possible to study crime, health and labor issues in ways never possible before, Ridder said.

Together with a graduate student, he is currently researching a possible connection between discharge dates and mortality rates at nonprofit and for-profit hospitals in California. Using statistics and public information, he’s looking at whether there’s a correlation between how quickly patients are discharged after suffering heart attacks and mortality. So far, he’s found there’s little difference between for-profit and nonprofit hospitals; however, larger hospitals tend to have better outcomes than smaller ones. He hopes to complete his research this summer.

“As economists, we have an important task to analyze the effectiveness of policies and advise the public on what works and what doesn’t,” Ridder said.

Ridder likens the process of using statistics to build and test economic theory to writing poetry. “If you write sonnets you have to adhere to a certain scheme,” he said. “This can be stifling, but it also focuses you and provides a framework for looking at the world.”

In his research on unemployment, for example, Ridder applies his economic tools to labor.

In one of his best-known studies, Ridder analyzes incentive-based employment programs, asking the question, Should you stimulate people with rewards or punish them if they don’t work? A complication, he said, is that people can self-select into such programs; taking that into account, a re-employment bonus induces people to find jobs, and that effect is stronger for those who would otherwise be unemployed the longest.

Quang Vuong, professor and chair of the economics department in the College, said Ridder adds visibility to USC.

“Professor Ridder brings with him a relaxed attitude typical of a Dutch scholar with the highest academic quality standards for his empirical work,” Vuong said. “He is a leader in a new approach to labor economics and the evaluation of social programs. He is a great addition to the economics department.”

Ridder and his Brazilian-born wife and son are adjusting well to the Los Angeles lifestyle. “We love it here,” he said. “My wife speaks Spanish and Portuguese, and Los Angeles is very well-suited to that. We love the culture, the food, and of course the weather is great.”

From Sports to Public Policy, USC Economist Does the Numbers