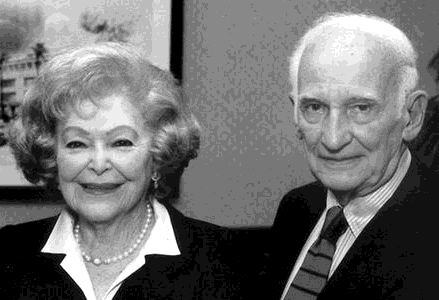 Virginia and Simon Ramo have each received the university’s highest award, the Presidential Medallion.

Simon and Virginia Ramo were honored with the university’s highest award, the USC Presidential Medallion, at the 21st annual Academic Convocation ceremony on March 19.

He is a scientist, industrialist, educator, author and the “R” in TRW, Inc. She is a former teacher – who wanted to be a banker – and a patron of the arts, medicine and education.

She played saxophone in the Trojan band and performed with a women’s orchestra. Later, she served on the executive committee of the Los Angeles Opera Association, and a music building at USC bears her name. He’s a serious violinist who plays a 1730 Lafont Joseph Guarnerius del Gesu and was a trustee of the National Symphony in Washington, D.C., and a board member of the Los Angeles Philharmonic.

Virginia Ramo was elected to the USC Board of Trustees in 1971, and is now a life trustee. While she served on the board, her husband Simon acted as an adviser to USC’s senior administration.

In 1999, in the renaming of the Keck School of Medicine of USC, Simon Ramo, as a director of the W.M. Keck Foundation, played a leading role in securing the $110 million naming gift for the university.

“There can be no more deserving individuals than Si and Virginia Ramo for the Presidential Medallion,” said Stephen J. Ryan, dean of the Keck School. “It is impossible to list their many contributions. In one of their most recent, they accepted the charge from President Sample and Keck Foundation Chairman Robert Day to be co-chairs of the Board of Overseers and proceeded to recruit a distinguished board that has been essential to the remarkable success of the Keck School and key to its bright future.

“Virginia has served with distinction as a USC trustee and helped many schools, as well as the USC libraries. In my world, she was essential to the success of the Doheny Eye Institute and its board of directors by recruiting its board, including our past chairman, Sid Webb.

Si has been a source of information and inspiration. He always asks the right questions to keep us focused,” said Ryan.

In 1971 the couple established the annual Ramo Music Faculty Award, given to a faculty member in the USC Thornton School of Music who has made an outstanding contribution through teaching and professional work in music. It is the highest honor a music faculty member can receive, and the recipient is recognized at the school’s annual honors convocation in May.

“We are eternally in the debt of Virginia and Si Ramo,” said Larry Livingston, dean of the USC Thornton School. “Virginia has not only been a generous benefactor, but equally, if not more important, the resonance of her spirit in our corridors has been an inspiration for everyone who has ever been a part of our school.”

Together, the Ramos have served as advisers to four USC presidents, including President Steven B. Sample, who could not be more enthusiastic about the Ramos’ enduring commitment to USC.

“The Ramos are longtime supporters and benefactors of USC whose contributions – both intellectual and financial – have enriched the lives of students and faculty,” said Sample. “USC wouldn’t be where it is without them.”