USC Dornsife College of Letters, Arts and Sciences authors emerged as main characters this past weekend during the 17th annual Los Angeles Times Festival of Books held for the second year at USC. They shared the page with the likes of journalist Patt Morrison interviewing Rodney King 20 years after the L.A. riots to comedian Molly Shannon reading her children’s book Tilly the Trickster.

“Contrary to popular lavender mythology, the modern gay movement did not start at the Stonewall Inn in Greenwich Village the weekend Judy Garland died,” said Freeman, who created and teaches a course called “Queer L.A.” “More than two and half years before that historic event, there was another riot, provoked by police harassment and brutality, about three miles due north of where we’re sitting today, at the Black Cat [Tavern] on the Silver Lake side of Sunset Boulevard.”

The foundation for that 1967 uprising was formed before 1950, upon the return of many homosexual veterans from World War II, when homosexuality was vilified as a criminal act, said Hawkins, director of ONE National Gay & Lesbian Archives at the USC Libraries. All 50 states had anti-sodomy laws and the American Psychiatric Association considered homosexuality a disease. The names of offenders were published in newspapers and their actions were equated with treason and espionage.

“For returning veterans like [LGBTQ advocate] Hal Call, this made homosexual activism difficult at best,” Hawkins said. “Call valued slow change instead of militancy and was responsible for the break-up of the Mattachine Society due to his hatred of communism.”

Founded in 1950 in Los Angeles, the Mattachine Society was one of the earliest groups to protect homosexual rights. With a leftist ideology, the founders had adopted a communist model.

Some members of the disbanded group later joined ONE Inc., today ONE National Gay & Lesbian Archives, which was established two years later.

“New leaders emerged from these liberation-based movements,” Hawkins said. “Morris Kight and Don Kilhefner were early founders and members of the Gay Liberation Front. Kight was instrumental in establishing the Gay Community Services Center. Around the same time, Jeanne Córdova  emerged as a dedicated activist for women and LGBTQ rights.”

Córdova  was 21 the summer of 1974 when Kight asked her and her lover to volunteer to be arrested as sex criminals in protest against the anti-sodomy penal code.

Reading from her 2011 award-winning memoir, When We Were Outlaws, Córdova recalled, “My mentor and I were one giant step closer to freedom for our people.”

Tongson discussed her new book Relocations: Queer Suburban Imaginaries (New York University Press, 2011), which shoots down the common belief that LGBTQ people must live in a big city to enjoy a satisfying life or become an activist.

“One can be gay in suburban areas in a sprawling city like Los Angeles,” Tongson said. Her book includes an analysis of the Inland Empire and Orange County. One chapter talks about Studio K and Cloud 9 located in Buena Park’s Knott’s Berry Farm in the ’80s.

“The purpose of those clubs was to present a wholesome family atmosphere where kids could be dropped off with adult supervision and have fun,” Tongson said. “It shows the creative propensity gay people have in finding fun wherever they are.”

Partly tongue-in-cheek, Bynum said the elements in fairy tales – usually a three-part story in which a problem must be solved in an enchanted setting – take away her burden of feeling that she must write something completely original.

Bender said plot and character are overrated in storytelling.

“With some structure in place, the originality comes out in different ways,” Bender said. “There is a precise, minimalist imagery in fairy tales that carries a dreamier weight and presents an enormous challenge for a writer.”

Bender pointed to the imagery in the Italian version of “Snow White.” In the Italian story, called “The Young Slave,” a spell overcomes a young beautiful girl, who at age 7 cannot be awoken and is encased in seven caskets of crystal, one within the other. As the girl grows into a woman, the glass caskets lengthen with her. 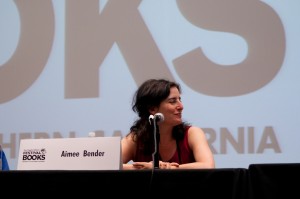 “Combining these two images, Snow White and a glass coffin is so provocative,” Bender said. “Is she dead? As the two grow together, the imagery and metaphor become equally as important as plot.”

Panelists noted that early fairy tales first published in 1812 by Jacob and Wilhelm Grimm in Germany originally were written for an aristocratic adult audience.

When Bender teaches her course on fairy tales, she said her students are sometimes surprised that the Grimm brothers’ stories included sex and violence. For example, in their tale “Rapunzel,” Rapunzel would let down her hair and her prince would climb up and he would “lay with her.” Finally, Rapunzel innocently asks her stepmother why her clothes are getting tight.

“Rapunzel’s stepmother tells her, ‘Oh, you naughty girl,’ ” Bender said. “These tales were not aimed at children. Now Disney has put its stamp on the stories and you can see culturally how they’ve morphed. The stories feel right now, but these tales keep changing. They’re not static and there is something wonderful about that.”

An audience member asked the panel whether they ever use their dreams in their stories. The woman shared a dream she once had in which three of Snow White’s seven dwarves came to her and told her their middle names. Dalton said she keeps a bedside journal and sometimes includes such unusual detail in her stories.

Saying she rarely uses material from her dreams, Bender was more interested in the dwarves’ middle names.

“I only remember one,” the woman replied. “Happy Alowishus.”

When writing, Bender said, it’s important to keep a sense of wonder.

“Think about what really gets you going as a reader,” Bender said. “What really moves you as opposed to what you think should move you and make you look smart or fabulous or hip.”

In 2010, Engel and her twin sister, Margaret Engel, wrote the play, Red Hot Patriot: The Kick-Ass Wit of Molly Ivins, which premiered in 2010 at the Philadelphia Theatre Co. with Kathleen Turner in the title role. Several other productions followed, including Los Angeles and Austin, and more cities are scheduled for later this year.

Lord talked about her latest book, The Accidental Feminist: How Elizabeth Taylor Raised Our Consciousness and We Were Too Distracted by Her Beauty to Notice (Bloomsbury Publishing, 2012). Karbo discussed her new book, How Georgia Became O’Keeffe: Lessons on the Art of Living (Globe Pequot Press, 2012).

The discussion quickly moved to the question of kick-ass versus bad-ass. Lenney read a quote from Molly Ivins, a newspaper columnist and political commentator, who died of breast cancer Jan. 31, 2007, at age 62.

“So keep fighting for freedom and justice, beloveds, but don’t forget to have fun doin’ it. Be outrageous. Rejoice in all the oddities that freedom can produce. And when you get through kicking ass and celebrating the sheer joy of a good fight, be sure to tell those who come after how much fun it was.”

Lenney said: “I’m interested in the fight here. Do you have to be bad-ass to be kick-ass?”

A game changer in the newsroom, Ivins was among the first women to become one of the boys, Engel said.

Engel herself was a journalist who started out in 1973 when most women in the newsroom were assigned to features. Her sister, too, was a newspaperwoman and they knew Ivins as an icon to any young female journalist of that time.

“She was someone who was smart, funny and irreverent,” Engel said. “In January 2007, Molly died of breast cancer and my twin had been scheduled to be on a panel with Molly that April. [Margaret] called me the day it was announced and said we need to write a one-woman play about Molly Ivins.”

The one-woman play turned into a larger production. 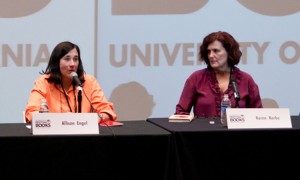 Karbo called kick-ass a proactive stance, and bad-ass, reactive. O’Keeffe, she said, was kick-ass but in a more subtle way.

“The revolution Georgia was in charge of was very, very quiet,” Karbo said. “There was no production code, but she was one woman with a group of men mentored by Alfred Stieglitz. O’Keeffe painted flowers and they thought as long as she stuck to nature she was cool.”

But she didn’t do as she was told. Like everyone in the ’20s who saw the Empire State Building go up, she wanted to paint skyscrapers. Responsible for hanging art in the shows, she one day hung her skyscraper painting along with the others, Karbo told the audience.

O’Keeffe came in the next day and her skyscraper painting was gone. The men decided unilaterally that skyscrapers were not her terrain and she should stick to flowers.

“She didn’t do anything,” Karbo said. “She didn’t react. And the next year when she had a one-woman show, she put her skyscraper back up and it was the first painting to sell for a large sum of money. So she was kick-ass, but it was a subterranean sort of sticking-to-her-guns.”

The two-day festival featured many other USC Dornsife participants, some including Carol Muske-Dukes and David St. John, professors of English, reading from their new books of poetry, Twin Cities (Penguin Books, 2011) and The Auroras (HarperCollins, 2012), respectively; Distinguished Professor of English T. C. Boyle reading some of his work; Deborah Harkness, professor of history, discussing her book A Discovery of Witches (Viking Press, 2011); Dan Schnur, director of the Jesse M. Unruh Institute of Politics housed at USC Dornsife, speaking about the presidential election; and Michael Quick, executive vice provost and professor of biological sciences, interviewing David Angus, professor of medicine at USC, about his book, The End of Illness (Free Press, 2012).

Read more about festival highlights at USC Turns the Page on the Los Angeles Times Festival of Books.

More stories about: Festival of Books

The event — the nation’s largest literary and cultural festival — traditionally draws more than 150,000 people to the USC University Park Campus.

In its 25th year, the annual L.A. Times Festival of Books is scheduled to return to USC this fall.

The event — the largest literary and cultural festival in the nation — attracted more than 150,000 people.