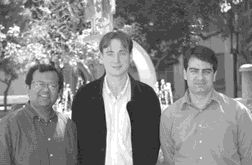 “Seven NSF career awards in a single year are an outstanding accomplishment for any large university, but it is absolutely astonishing for an engineering school,” said Max Nikias, dean of the USC School of Engineering. “I’m very proud of these young faculty members.”

The highly competitive awards provide between $300,000 and $500,000 each for research, teaching and outreach activities during the next five years. The purpose of Early Career awards is to identify future academic leaders and help them establish their research and teaching careers.

• MATHIEU DESBRUN is developing new mathematical and computational tools for digital geometry that will advance the field of computer graphics. His research is focused on how computers can better represent and process curved surfaces, and more generally, any irregular, nonuniform sampled data. The tools he is developing will accelerate the use of 3-D graphics in medical imaging, biology, electronic commerce, video games and haptics, the technology of touch and sensory feedback.

• ASHISH GOEL is creating algorithms to improve the performance of computer networks by taking into account issues such as fairness and availability as well as efficiency.

Traditionally, managers try to increase network efficiency and maximize the total amount of data the network can handle. But some computer users, and some computer applications, use a disproportionate share of network bandwidth, Goel explained. His algorithms would keep track of the share of resources individuals use and penalize the worst offenders, perhaps by suspending them from the network for a period, or by some other action. Selfish users would then have an incentive to change behavior, and eventually so would those writing programs.

• CHRISTOS PAPADOPOULOS, a computer network specialist, is working on the design of the next version of the Internet.

“There are two approaches you can take,” said Papadopoulos. “One is that the Internet should continue to be simple, which could make it difficult to improve performance, security and network management. Others maintain that tomorrow’s Internet will have to be a lot more intelligent and complex to do the things that we want it to do.”

Papadopoulos proposes a new paradigm governing how new computer applications such as immersive audio and video, or video conferencing, interact with networks. He would break down the increasingly complex applications into smaller, simpler components that could be distributed on several different servers. Network components would be kept simple so they can be easily implemented on existing equipment, while the most complex parts of the application would remain on an individual’s computer.

“It means you have to think deeper about the distinction between an application and the network,” he said.

“Mobile robot teams hold the promise of performing tasks that cannot be done by a single robot. They will have increased tolerance for faults and they might be able to perform tasks more quickly,” said Sukhatme. “However, a firm theoretical base for such systems does not exist.”

Sukhatme will study large-scale robot groups experimentally by testing his hypotheses with physical and simulated robots, and theoretically by mathematically characterizing their behavior.

He now works with robot groups of about a dozen, which do things such as mapping, tracking targets and maintaining wireless networks. The control and communications systems needed to handle the interactions of robot groups numbering in the hundreds and eventually thousands will be far more complex. Oceanographers, for example, would like to deploy that many robots to monitor ocean pollution or circulation patterns on a large scale, and in fact, Sukhatme is also an investigator on an NSF project to do just that.

• WON NAMGOONG is designing a high-performance, ultra-wideband radio based on the same standard low-cost semiconductor technology used to make microprocessors. Ultra-wideband radio is an emerging and radically different wireless technology in which data is transmitted by rapid-fire low-power bursts of radio energy spread across the entire radio spectrum rather than by radio waves tuned to narrow frequencies.

While the technology could lead to highly secure wireless voice and data communications and devices such as handheld ground- and wall-penetrating radar, it also poses huge engineering design challenges. A major concern of ultra-wideband radio proponents is the ability of the radios to efficiently handle the extremely wide bandwidth, dynamic range and clock speeds – radio pulses last nanoseconds, or billionths of a second – required to make the technology a reality. He proposes to divide the huge incoming ultra-wideband signals into separate entities and then process each in parallel.

“This research will demonstrate the feasibility and effectiveness of the proposed architecture for reception and transmission of ultra-wideband signals,” said Namgoong. “Our goal is to design a high-performance single-chip ultra-wideband radio.”

• AHMED HELMY is developing protocols and the hardware to multicast to large-scale, mobile, ad hoc wireless networks. Multicasting is sending a single message to a large but selected group of individuals. Ad hoc networks are groups where participants join and leave at will.

“Ad hoc networks consist of wireless devices that are able to operate without a network infrastructure,” Helmy said. There are a growing number of wireless devices such as cell phones, laptop computers, personal digital assistants, global positioning systems and targeting and other devices in the military realm.

“When people move around with these devices, that really complicates the problem of providing reliable multicasting service on demand,” he said.

“I am finding conductive molecules that mimic the electronic components that we fabricate from silicon today,” Zhou said. “The eventual success of this program will firmly establish molecular electronics as an intriguing and practical technology with great potential to replace silicon-based electronics.”

Zhou was also cited in the December 2001 issue of Science for his work in creating molecular diodes for nano-circuits. Science selected nano-circuits as the “Breakthrough of the Year.”