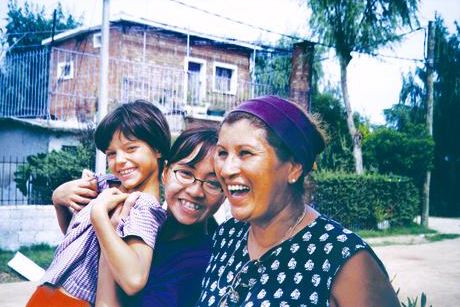 International relations major Tammy Thien Tam Tran, center, had a truly international Alternative Spring Break experience when she traveled to Uruguay. Above, she hugs Cat and Maria in front of the clinic in El Cerro.

Twenty students, an adviser – USC Hillel’s Rabbi Jonathan Klein – and a Hillel staff member traveled to Uruguay in March to spend 10 days in El Cerro, a small community just outside the capital of Montevideo.

Other USC groups worked in the desert, in homeless shelters, at the Navajo Nation and on Catalina Island. The Catalina trip was also a first.

In all, there were five volunteer trips with distinct agendasThe trips and their student coordinators were:

Klein said the idea for an international destination came to him last year at a Hillel conference in the Poconos, where he met Jewish students from Montevideo’s Hillel. “I was blown away by their incredible perspective,” he said.

The program was a partnership between Hillel and USC’s Volunteer Center with an emphasis on the Jewish notion of tzedakah, Klein said. “Tzedakah means charity, but more than that, translates as righteousness,” said Klein. Each day while in Uruguay, Klein’s group studied Jewish texts, learning about giving honor and dignity to the poor.

The students helped to build a medical distribution site and an after-school children’s center, and they renovated a clothing distribution center. Materials were donated by Uruguayans.

Senior Jennifer Medina, who speaks Spanish, was affected by the despair she saw in many of the villagers. Yet, she said, women who had not been able to continue their education because of lack of funds for books or clothing were hoping for a better life for their children. And generally, she said, the people were warm and friendly.

What the students saw and learned in Uruguay ignited discussions on poverty, freedom, opportunities and hope for the future, said Medina. Students stayed with families in the Montevideo Jewish community

Most of the student volunteers were Jewish, but the team included a Hindu and a Buddhist as well, Klein said. They celebrated the Sabbath with a side trip to Argentina after finishing their work.

The 18 students who took part in the Catalina trip stayed at the Emerald Bay Boy Scout Camp and worked nearby removing non-native fennel and castor bean plants. They also replanted blue oaks, which are native to Emerald Bay.

“The trip was challenging to plan, especially because it was a new program,” said Moore, a psychology major. “It was a pretty big undertaking, but at the end of the week we could see the results.”

The trip had a strong emphasis on discussion and reflection, she said. “Some of the discussions were on what to do about the L.A. River, how we as USC students can educate others on the problems surrounding it, and how politics and the environment are interrelated.”

Her goal as coordinator was to inspire participants to become more involved in environmental work. Apparently she succeeded. Since returning home, Moore said, “The group is already e-mailing each other about each and every environment-related service event that they are involved in, and they’re getting involved with causes here in Los Angeles.”

USC volunteers have gone to Death Valley since 1992. This year, 15 students took part in the six-day environmental service-learning experience, camping five nights at Breakfast Canyon. It was student coordinator Pushkar Joshi’s third trip; he also went during his freshman and junior year.

On the second evening, Julie Sieker, a business major, led a discussion on the history of the region. “Now, we know why they call it Death Valley,” Joshi said.

The group helped National Park rangers with projects such as revegetation. They moved cattails and bulrushes from an existing wetland and planted them at the Texas Springs campground, which had suffered from water runoff and erosion. They removed invasive weeds – London rocket and salt cedar – from the campground.

“We got to see a lot more of Death Valley than we normally do since we were always on time and finished projects ahead of schedule. It was an educational exercise for me, and a life-changing experience for most of the participants.”

Two dozen students participated in the homeless issues trip, spending their first day at the Sunshine Mission near USC and the downtown Midnight Mission. Then they traveled for the fifth time to Dorothy’s Place, a shelter in Salinas, accompanied by Michelle Blanchette, director of the Volunteer Center, and Rabbi Susan Laemmle, dean of religious life.

And 26 students and four advisers caravaned to the Navajo Nation in Bluff, Utah, where they painted homes and made repairs as in past years, and spent their evenings learning about Native American culture.

Students pay a fee to take part in all the programs. The trip to Uruguay was the most expensive, but some costs are covered by a campus philanthropic fund and private donations.

Still, most of the ASB students return to campus each spring feeling that they have received much more than they gave, said Blanchette – and they’re eager to do it again next year.