The Hunger Games, the record-setting blockbuster based on the bestselling young adult series, includes a celebrated soundtrack of artists Neko Case, Taylor Swift and The Decemberists. 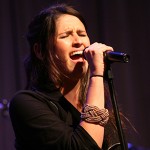 The CD, “The Hunger Games: Songs From District 12 and Beyond,” sold 175,000 copies in its first week of release, according to Nielsen SoundScan, easily outpacing longtime leader Adele.

Among the high-wattage collection of stars on the soundtrack, the USC Thornton School of Music is prominently featured. James Newton Howard DMA ’69 wrote the majestic score, student Rozzi Crane sings a track with Maroon 5 and former student Jayme Dee is featured in her own song, “Rules.”

Crane, a junior in USC Thornton’s Popular Music program, sings with Maroon 5 on their song “Come Away.” Named a new and developing artist to watch in Hits Magazine, Crane has opened for Earth, Wind & Fire, the Steve Miller Band and Esperanza Spaulding, among others, and toured as a background vocalist with the Eagles’ Don Henley and Brazilian legend Sergio Mendes. She is the first artist signed to 222 Records, the new label run by Maroon 5 front man and The Voice mentor Adam Levine.

“Rozzi’s success is a direct result of her talent, drive and leveraging all of the opportunities offered while at USC,” said Chris Sampson, associate dean and director of the Popular Music program. “She’s been very successful at taking every lesson learned in the classroom and making them relevant to her professional aspirations.”

Dee, a singer-songwriter, attended the Popular Music program for a semester before being signed to Universal Republic.

“I had the pleasure of having Jayme in my songwriting course, and we still consider her part of the Popular Music family,” Sampson said. “We’re very proud of her.”

Newton Howard, a pianist, producer and composer, has received multiple Academy Award nominations and an Emmy for his theme for the television show ER. He has scored the recent Batman films, M. Night Shyamalan’s films and other noteworthy movies, including The Fugitive, King Kong and Michael Clayton.

He also is a current member of the USC Thoronton’s Board of Councilors. In 2007, he donated his collection of scores and sketches, appraised at more than $2 million, to the USC Libraries’ Special Collections.

“We are thrilled to be featured so prominently in the music for The Hunger Games,” said Robert A. Cutietta, dean of USC Thornton. “To see two of our young, emerging students included with an established artist like alumnus James Newton Howard speaks to the reach of the school in music today.”

Produced by T-Bone Burnett, the soundtrack for The Hunger Games also features well-regarded indie musicians and bands like Punch Brothers, Arcade Fire and The Secret Sisters.

USC students gather to tell the story of the African diaspora

The ambitious virtual collaboration brings together artists from across the university to share a more complete history of the African American experience.

From a distance, USC Thornton upperclassmen find a way to welcome new students

Unable to throw their usual welcoming party due to the pandemic, students in the Popular Music program organized a game night to embrace the latest members of the Trojan Family.

Student club helps introduce children to music, whether in person or on Zoom