University Professor Warren Bennis served as one of the youngest infantry officers in World War II, earning a Bronze Star and Purple Heart as a 19-year-old leading his platoon in the Battle of the Bulge. So sparked a life interest in the study of leadership. After helping establish leadership as an academic field in his time teaching at the Massachusetts Institute of Technology, Harvard University and Boston University in the 1950s and ’60s, Bennis put his preparation into practice as president of the University of Cincinnati from 1971-77. A 1943 graduate of Dorsey High School, Bennis returned to Los Angeles in 1980 to join the faculty of the USC Marshall School of Business, where he founded USC’s Leadership Institute. In his new book, Still Surprised: A Memoir of a Life in Leadership, Bennis calls the past 30 years at USC the most enjoyable of his life. He spoke with writer Matthew Kredell. 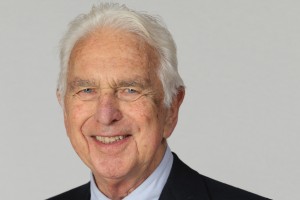 MK: When you entered college in the late 1940s, there was little academic interest in management. What led you to devote your life to studying and teaching leadership?

WB: I think often people work on issues they have conflict about. I think what led me to leadership was the fact that I did not want to personally feel helpless as I thought my older twin brothers were – they were 10 years older than I – or my dad, who was unceremoniously dumped from his job as a shipping clerk overnight in 1932. So I think I was attracted to leadership because I wanted to be in a position where nobody could do to me what happened to my dad.

MK: You co-taught the popular class, “The Art and Adventure of Leadership,” with USC President Emeritus Steven B. Sample. Now that Sample has moved on from his presidency, what is the future of that class?

MK: You chaired the committee that selected Steven Sample in 1991. What would you say was Sample’s biggest accomplishment as USC president?

WB: I feel about Dr. Sample the way Prime Minister Nehru of India once said about Gandhi. He said Gandhi made India proud of herself. We were attracting better and better students every year, and I think the faculty members were proud to be here. When I came here in 1980, a lot of my friends assumed I was going to UCLA. Now it is totally different.

MK: You also served on the committee that chose C. L. Max Nikias as USC’s 11th president. What made him stand out from the other candidates?

WB: The search came down to a very impressive group. Max, I think, was equal to the best of them in every area. He had all the criteria. You cannot hire a president without having a number of seemingly contradictory criteria – like knowledge of intercollegiate athletics, knowledge of medical schools, knowledge of fundraising, being articulate, being able to be the avatar of what the school stands for. No one came close to him in terms of satisfying the criteria, plus there was his experience on this campus. He really understood this disparate community of colleges and departments. The challenges will be difficult. Filling Dr. Sample’s shoes is no easy task, nor will fundraising at a time of great recession. He has the capabilities of achieving under the most difficult conditions I can imagine.

MK: Still Surprised: A Memoir of a Life in Leadership is your 30th book. What is it about putting together a book that so enthralls you?

WB: Well, partly it was a way to gain influence, not through position but through ‘voice.’ To have people read your words, to have a book reviewed – and this one has received some positive reviews, including from The Economist and The Wall Street Journal – is a way of feeling I’ve influenced the lives of others for the common good. Running through all my work, I think there’s a humanitarian impulse that if we work together for a good cause, we can change the world. Then I got rewarded, not financially particularly but rewarded in people knowing I’m an author. ‘Author,’ after all, is the root of the word ‘authority.’ That is probably what drove me, wanting to be in a position of authority.

MK: Your previous books are all examinations on leadership. What was it like writing a memoir?

WB: I think everyone ought to write a memoir every five years of your life because it makes you pay attention to the details. Not necessarily to be published, but to check your progress as you go along. You can see looking back what has led you to where you are now.

MK: Doug McGregor, the president of Antioch College when you attended the school, turned out to be an important mentor in your life. Do you think the mentor relationship is an important life step that often gets neglected in today’s world?

WB: Yes, I think so. Mentors are terribly important. Wouldn’t it be marvelous if every organization had a directory of terrific mentors who were available, and you could asterisk certain people because they really are good at it and enjoy doing it? The more interesting mentors you can have without becoming a clone of any of them, the more the merrier. But I think you have to carefully choose them so they are in accord with what you want to do in life. Someone you would like to emulate, and Doug was that kind of man to me. My mentor thought I was bright enough to apply for a Ph.D. I took his word for it. I felt like he had given me a golden seed. He had sensed something in me that struck me as surprising. I then applied and got into the MIT economics program.

MK: Perhaps the biggest leadership challenge on campus is Pat Haden taking over an athletic program hit hard by NCAA sanctions. What are your thoughts on his situation?

WB: It’s an important question: How do you redeem the reputation that’s been stained by the last years and the penalties, which are harsh? I think Mr. Haden is so aware of the Trojan Family’s values that he’s going to be more noble than the noble in every way possible. The opportunity he has is not only to restore USC’s collegiate program, but to do something that will make people less cynical about collegiate football.

A conversation with Warren Bennis