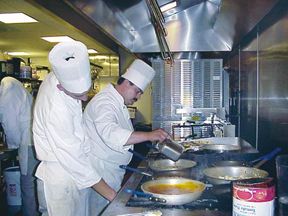 There’s fast and furious movement in the kitchen as chefs Brian McCarthy and Elver Acosta work against the clock to prepare their meals.

Last year it was scallops.

This year, USC chefs were called upon to prepare duck. And they rose to the occasion in the second annual Culinary Challenge held to show off their talents.

Five chefs participated in the Parkside International Residence Hall’s challenge on April 12. They had to prepare a meal using a six-ounce portion of duck, a starch, and a vegetable in either Southern or Southwestern style.

And don’t believe it if you’re told not to “play” with your food – these chefs highly recommend it as a way to develop creative new dishes.

The chefs had to prepare two plates – one for display and one for tasting – and they had 50-minutes in which to do it all.

The tasting and judging was done by Mark Baida, USC’s executive chef. He considered how the chefs utilized the products, their organization, cleanliness, cooking techniques, adherence to their submitted recipes (such as “Duck Napoleon”, and the eye-appeal of their plates.

The event was meant to encourage creativity, said Green, so there was no announced winner.

“It’s a chef’s dream to come to the IRH,” he said, so they were all winners.