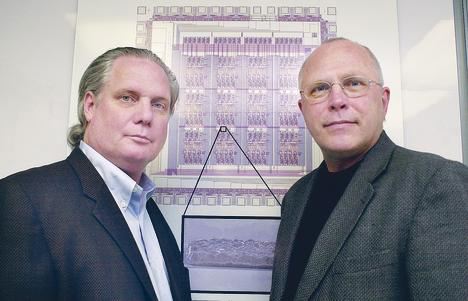 Biomedical engineer Theodore Berger (left) and John Granacki, director of the advanced systems division of the Information Sciences Institute, continue their work in the USC School of Engineering to develop the next generation computer chip. Berger also directs the USC Center for Neural Engineering. In the background is a rendering of an analog microchip to be implanted in the hippocampus region of the brain to perform speech recognition.

USC engineers are tapping the brain to develop the next generation of computer chip, a chip that will be more resilient to damage and better at a host of tasks involving pattern recognition.

“Biologically inspired computing modules performing high-level pattern recognition will be a key aspect of future computing systems,” said John Granacki, director of the advanced systems division of the Information Sciences Institute in the USC School of Engineering. The new chips could identify faces, fingerprints or signatures more quickly than current technology. “A desirable goal would be a machine that can scan medical images for signs of abnormality.”

Granacki and Theodore Berger, professor of biomedical engineering and director of the USC Center for Neural Engineering, will receive $2 million in grants from the new Biological Information Technology and Systems program of the National Science Foundation and from ISI.For several years, Berger has been studying the faint electrical signals going in and out of individual neurons and networks of neurons in live slices of the hippocampus area of rat brains.

When a neuron receives an electrical signal, it changes the pattern of the signal before sending it on to other neurons, and timing is crucial. Reception of signal A or signal B alone might not activate a neuron, but signal A followed by signal B within a certain number of microseconds will trigger the neuron to send signal C to another neuron.

In their experiments, Berger’s group has been bombarding rat hippocampal neurons with a wide range of electrical signals and studying the changed signals that emerge.

The group’s research has led to mathematical models – developed with Vasilis Marmarelis, professor of biomedical engineering – that represent the changes produced by a single neuron and by increasingly larger groups of neurons. Marmarelis is a co-investigator on the grants.

“Our current chip has 18 dynamic neuron synapses, and it behaves just like a network of real biological neurons in the hippocampus,” Granacki said. “When the chip receives real electrical signals as inputs, it processes them and sends out exactly the same signals that a real neuron would send.”

Berger’s ultimate goal is to make a computer chip that can be connected to human brain tissue and take over a cognitive function that has been destroyed by epilepsy, Alzheimer’s disease or some other brain problem.

“We’ll need at least 10,000 neuron models to do anything useful in the human brain, and these will have to be on a chip small enough to be surgically and strategically placed in a particular location of the brain,” said Berger.

Armand Tanguay Jr., professor of electrical engineering and another co-investigator on the grants, is collaborating with Berger’s team to develop an interface electronic device for the future brain chip, the link between neuron and silicon. It has an array of tiny electrodes shaped to match the spatial layout of the hippocampus. The researchers have learned that neurons prefer some materials and have induced neurons to grow around synthetic substances and compounds extracted from mouse tumor cells.

While it will be years before Berger is able to implant a computer chip in someone’s brain, his project has already produced one commercial spin-off. In 1999, he and Jim-Shih Liaw, a research assistant professor of biomedical engineering, created a speech recognition system that has proven better than human ears at picking out spoken words in a noisy environment. The system is based on Berger’s neural models.

That spin-off led to Berger’s current collaboration with Granacki, which is another spin-off from the long-range project to build an implantable brain chip.

“We want to imitate neural procedures on silicon because the brain is a superior computational device in many ways,” said Berger. “Funding institutions are increasingly supporting efforts to develop biologically based computing systems, both for real-world applications such as pattern recognition, and also as next-generation neural prostheses.”

The architecture of brain circuitry is more complex than that of silicon computer systems. Neurons are layered over each other, and outputs from a single neuron go to many different places. Even the most complex silicon computer chips are simpler in both structure and function.

Fault tolerance in the silicon realm pales in comparison to the brain. When confronted with the death of several thousand neurons from the consumption of a single alcoholic drink, neural circuits reconfigure themselves and continue to work. Granacki thinks this is something he and Berger can exploit to build a more reliable computer chip.

Unlike modern digital computer chips, the brain is analog and runs much slower. Granacki’s early prototypes have also been analog, but his next chip will be digital in order to pack more neuron models into less space. It will also run as fast as today’s best silicon chips while functioning more like neurons.

“So far, computers have been all math and logic,” said Granacki. “We’re inspired by biology to create a hybrid that will be a superior computing device.”