Happiness – the basic human goal – depends upon good ethical conduct, regardless of one’s religious beliefs, said the 14th Dalai Lama during his first visit to USC on May 3.

“An open heart helps us become aware of our potential,” His Holiness told 4,800 people at the Galen Center and later more than 1,200 at Bovard Auditorium. Most of the attendees were students.

“An open heart knows no fear. Has no jealousy or hatred.” 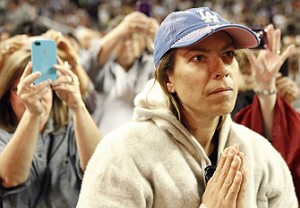 Members of the crowd listen attentively to the Buddhist leader, who spoke about universal principles.

Wearing a traditional Tibetan robe – which happens to be the USC colors cardinal and gold – the Dalai Lama elicited loud cheers from both crowds when he donned a USC cap.

“We’re truly grateful to host this historic event,” said Varun Soni, dean of the USC Office of Religious Life, referring to the USC Student Interfaith Council, which organized the visit under the auspices of his office.

“Not only do we share His Holiness’ core values of service and engagement, we also share the same colors.”

Due to illness, the Dalai Lama had been forced to cancel appearances in Long Beach on May 1 and at UCLA on May 2. At one point during his two-hour discussion at Bovard, he pulled from his robe a pill bottle and took medicine, but appeared to be in fine form. He kicked off his shoes and made himself comfortable sitting cross-legged on a chair.

The Buddhist leader emphasized a moral framework based on universal rather than religious principles. Called secular ethics, it is a philosophy encouraging people to think for themselves and have genuine concern for their fellow human beings. It differs from religious ethics, which holds that people must do the right thing or be punished by God.

The Dalai Lama said he is a devout Buddhist who respects religion. But, he cautioned, the danger is to become attached to religion.

“Attachment to anything is bad,” he said. “You are your own master.”

At Bovard, the Dalai Lama joined a panel of renowned scholars: Antonio Damasio, University Professor, David Dornsife Professor of Neuroscience and director of the USC Brain and Creativity Institute; Gideon Yaffe, professor of philosophy and law at USC Dornsife College; Duncan Williams, Shinjo Ito Distinguished Chair in Japanese Buddhism at the University of California, Berkeley, who will be teaching at USC in the fall; and Jonathan Haidt, professor of psychology at the University of Virginia.

The moderator was Pico Iyer, journalist and author of a recent biography of the Dalai Lama.

Iyer pointed out that 23 years ago, Damasio participated in a similar panel discussion with the Dalai Lama in California – the same year His Holiness won the Nobel Peace Prize.

“So, Dr. Damasio is a good luck charm,” Iyer said.

During the discussion, the Dalai Lama implied that love and compassion are natural instincts. For example, he said, mothers typically nurture their offspring instinctively.

“In some cases, mothers are consciously thinking about how their children’s lives might be connected to their welfare down the line so they must take care of their children,” the Dalai Lama said. “But in most cases, it’s an instinctive response to take care of her child.”

“But we as humans have the possibility of reflecting on the moral issues, recognizing it and structuring it for the greater good.”

The brain, Damasio said, plays a part in ethical and moral behavior. He has spent much of his career working with patients rendered entirely emotionless due to frontal lobe brain damage. Those with frontal lobe damage cannot obey social rules. But ethics is part biological and part cultural, he said.

“Ethics is not just about what comes naturally from our genes and our biology, it is also what cultural humans are able to create,” Damasio said.

At one point in the scientific discussion, the Dalai Lama, who often spoke in Tibetan and had an interpreter translating, touched his heart.

“Morals, ethics and the sense of caring – it all starts here.”

He always returned to compassion and kindness. Earlier at the Galen Center, he was asked about people celebrating the recent killing of Al Qaeda leader Osama bin Laden.

“Where does compassion and ethics fit into that?” asked moderator James Doty, clinical professor of neurosurgery at Stanford University, chairman of the Dalai Lama Foundation and a board member of the USC Brain and Creativity Institute.

“There must be a distinction between actor and action,” the Dalai Lama said. “Bin Laden was a force of destruction so his action needed justice. But as a human being, we must have compassion. He committed a destructive action so actions had to be taken to stop it.”

Forgiveness doesn’t mean to forget what happened, he said.

Leaders of the two institutions note that the unique partnership is a national model.

Most Americans today are choosing cremation. Here’s why burials are becoming less common

As late as 1970, only about 5% of Americans chose cremation; now, more than half of us choose the method. A USC expert explains why.

The patriotic Virgin: How Mary has been marshaled for religious nationalism and military campaigns

Many religions have been used to prop up nationalism, and Catholicism is no exception. A USC Dornsife scholar who is also a Jesuit priest explores how the Virgin Mary had been enlisted to stir up patriotic fervor.

Dalai Lama of Tibet speaks at USC for first time