Her confidence faltered, however, when native Spanish speakers struck up a conversation. 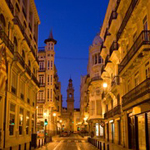 The city of Valencia was home to a group of Trojans over the summer when they visited Spain during the first Valencia Summer Program offered by USC Dornsife.

That was before she spent a month in Spain.

“I can’t emphasize how dramatically better my Spanish speaking skills became,” said McDonald, who is majoring in environmental studies with a minor in Spanish. “Being immersed in a culture requires you to muster the confidence to speak the language and forces you to speak it all the time.”

McDonald was among 10 USC students who traveled to Valencia as part of USC Dornsife’s inaugural Valencia Summer Program. Leaving June 24, students relied on their Spanish-speaking skills the second their airplane touched down in the country’s third largest city.

“It is always intimidating to speak to people who are fluent, but if you have no choice, you do it,” said Kelsey Wang, a USC Dornsife senior majoring in biology with a double minor in art history and Spanish. “Now I don’t feel uncomfortable attempting to say things even if they’re not grammatically correct.”

Complete immersion in a new culture is one aim of the program designed by Marianna Chodorowska-Pilch, assistant professor of Spanish at USC Dornsife.

The four-week interdisciplinary course gave students a chance to improve their Spanish proficiency while providing a better understanding of immigration in Spain.

Offered by the Department of Spanish and Portuguese and the School of International Relations in partnership with faculty from the University of Valencia, students probed different aspects of immigration through lectures and trips. The course gave them four credits.

“I always believed a course in Valencia would be an eye-opening experience for USC students because I am familiar with immigration in Spain,” Chodorowska-Pilch said. “Students learn how immigrants are perceived in Europe and how the same problem in the U.S. is being dealt with in Spain.”

Although Valencia has a population of more than 800,000, the city has the feel of a community and is an ideal setting for students to mingle with residents. A low number of tourists meant fewer opportunities to speak English.

The program will be held again this summer. In addition to students studying Spanish and international relations, those interested in sociology and psychology or other fields may opt to take the course, Chodorowska-Pilch said. It is open to all USC students who have intermediate Spanish skills.

Linda Cole, associate director of the School of International Relations, said the course allows students to put into practice the research and analytic training they receive in their USC international relations coursework.

“They can apply writing and expository skills,” Cole said, “and collaborate with fellow students toward solving or unsnarling difficult local issues, such as immigration in Spain: how the government of Spain is dealing with the challenges of immigration, as well as how immigrants are faring in Spain.

“Students will be able to relate this in-depth study undertaken in Valencia when they return to campus and continue to study similar challenges faced by peoples and governments all over the world.”

Applications for next year’s trip from June 16 to July 14 will be accepted starting on Jan. 16.

Over the summer, USC students discovered the beauty of Spain in trips led by Chodorowska-Pilch. They embraced the country’s culture and rush-free way of life, strolled along cobblestone streets and enjoyed the traditional, leisurely meals that span three to four hours.

Among other things, they tasted paella and drank granizado at local restaurants, marveled at exhibits in Frank Gehry’s Guggenheim Museum Bilbao and enjoyed a day at Albufera, a natural saltwater lagoon and estuary on the Gulf of Valencia.

“Marianna was amazing,” Wang said. “She knows the city and went out of her way to expose us to everything that would help us get the most out of the trip.”

One memorable weekend was spent soaking in the culture of northern Spain with trips to San Sebastian and Bilbao. The students dined as northerners do – standing up and snacking on pintxos, the Basque word for tapas.

Back from Spain, McDonald said the program did more than fulfill her desire to travel abroad.

“It allowed me to gain confidence in my Spanish-speaking skills,” said the senior, who eventually wants to practice environmental law in Latin America. “I plan on traveling a lot, and I now have a newfound appreciation for other societies and cultures. I now have the confidence to delve into a new culture and know I can acclimate.”

The student work revives a beloved tradition linking the USC School of Dramatic Arts and the largest arts festival in the world.

Sampling the sensations of Spain