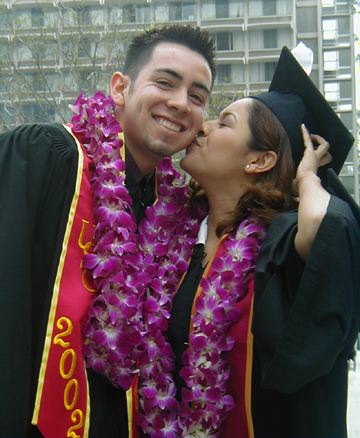 Ramon Merino and Gessell Jarquin are new graduates of the USC Marshall School of Business. Merino, who was born in Mexico, and Jarquin, who was born in Nicaragua, met at USC two years ago � each is the eldest child in the family and the first sibling to graduate college. Jarquin will take her bachelor’s degree to work as a project manager at Disney. Merino plans a career in real estate finance.

Earlier that morning, President Steven B. Sample conferred 4,381 bachelor’s degrees, 3,265 master’s degrees and 1,151 doctorates. This year’s more than 8,500 graduates included students finishing course work during the upcoming summer sessions, as well as those who completed their programs during the 2001-02 academic year.

Receiving honorary doctorates at the ceremony were Robert Day, chair of the W. M. Keck Foundation, which contributed $110 million in USC in 1999 to rename its medical school; retired Gen. William Lyon, a leading home builder and veteran of two wars; Cardinal Roger M. Mahony, archbishop of the Archdiocese of Los Angeles, the largest in the country; and the Rev. Cecil “Chip” Murray, pastor of Los Angeles’ First African Methodist Episcopal Church and a prominent voice for the city’s disadvantaged residents.

Valedictorian Stanley Chou, a pre-med student who earned degrees in biomedical engineering and psychology, also spoke at the ceremony.

“Rather than have so many different honor societies with their own cords, which has happened in past years, we thought it would be a good notion to have a university honor cord,” said University Marshal John Callaghan, directing his 10th USC commencement. The idea has been so well supported that most academic units have purchased the cords for their students, he said.

For the third year, two full days of pre-commencement events were scheduled, from the Phi Kappa Phi Awards on Wednesday, May 8, to the separate African-American and Latino student ceremonies on Thursday.