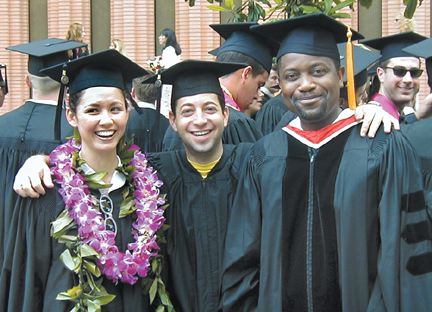 Kimberley Wolter and Matthew Skiena earned B.A.s from the USC School of Theatre at last year’s commencement ceremony. With them at right is Martin Fusi, an assistant professor in the school.

Earlier that morning, President Steven B. Sample will confer 4,381 bachelor’s degrees, 3,265 master’s degrees and 1,151 doctorates. The more than 8,500 expected graduates include students finishing course work during the upcoming summer sessions, as well as those who completed their programs during the 2001-02 academic year.

The processional march into Alumni Memorial Park will begin at 8:30 a.m., followed by the commencement ceremony at 9 a.m. Rabbi Susan Laemmle, dean of religious life, will deliver the invocation.

Receiving honorary doctorates at the ceremony will be Robert Day, chair of the W. M. Keck Foundation, which contributed $110 million to USC in 1999 to rename its medical school; retired Gen. William Lyon, a leading home builder and veteran of two wars; Cardinal Roger M. Mahony, archbishop of the Archdiocese of Los Angeles, the largest in the country; and the Rev. Cecil “Chip” Murray, pastor of Los Angeles’ First African Methodist Episcopal Church and a prominent voice for the city’s disadvantaged residents.

Valedictorian Stanley Chou, a pre-med student who will earn degrees in biomedical engineering and psychology, will also speak at the ceremony.

“Rather than have so many different honor societies with their own cords, which has happened in past years, we thought it would be a good notion to have a university honor cord,” said University Marshal John Callaghan, directing his 10th USC commencement (see accompanying story). The idea has been so well supported that nearly all academic units have purchased the cords for their students, he said.

For the third year, two full days of pre-commencement events are scheduled, from the Phi Kappa Phi Initiation Ceremony on Wednesday, May 8, to the separate African-American and Latino student ceremonies at 8 p.m. Thursday.

For the second year,the Senior and Graduate Student Recognition Awards Ceremony will be at 1 p.m. Thursday in Bovard Auditorium.

Gearing Up for Commencement