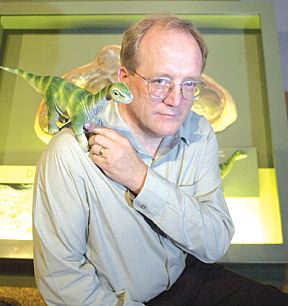 The findings of biologist Simon Tavaré and his colleagues — that primates may be much older than supposed — may prompt a rewriting of the species’ evolution. On Tavaré’s shoulder is a model of a sauropod hatchling, which roamed the Earth with the first humanoid more than 80 million years ago.

The findings may prompt a rewriting of the story of primate evolution.

Many scientists have long assumed a 10-million-year gap at most between the oldest primate fossil – dating back 55 million years – and the origin of the primate group’s earliest common ancestor, said Simon Tavaré, holder of the George and Louise Kawamoto Chair in Biological Sciences at the USC College of Letters, Arts and Sciences and the study’s lead author.

This new research – combining a new statistical method and an exhaustive review of the scientific literature – estimates that gap was actually about 25 million years long. Researchers also concluded that about 95 percent of the fossil record is missing, Tavaré said.

That is partly because some species were too small to leave a fossil record or died in an area that didn’t lend itself to fossil preservation, he said – and partly because scientists haven’t found them.

“If you look at the fossil record, the age of the oldest primate is dated to about 55 million years ago,” Tavaré said. “The question is, How good is the fosil record? What we think is … only about 5 percent of extinct primate species have been found.”

The earlier date of origin indicates that primates may have originated in southern tropical regions and expanded northward, rather than the other way around as is currently thought.

If primates originated 85 million years ago, then the continental drift that broke up Gondwanaland – a hypothetical supercontinent that once connected the Indian subcontinent and the land masses of the Southern Hemisphere – probably contributed to primate divergence, said the study.

As researchers have revised, or stretched, the time scale along the evolutionary tree, they have estimated the divergence of humans from chimps at 8 million years ago rather than 5 million years ago.

Robert Martin, vice president of academic affairs at Chicago’s Field Museum and one of the study’s co-authors, said current interpretations of primate and human evolution are flawed because paleontologists rely too heavily on interpretation of the known fossil record.

“It’s as if paleontologists have been trying to reconstruct a 1,000-piece jigsaw puzzle using just 50 pieces,” Martin said.

This imprecision has a ripple effect because molecular evolutionists tend to combine inferred dates of origin provided by paleontologists with their own molecular data to construct a time-scale for the evolutionary trees of species.

“The dates of splits in the primate tree are open to discussion,” Tavaré said. “And the same goes for any group of species that has a poor fossil record.”

Aside from USC and the Field Museum, scientists involved in the study were from Harvard University, the University of Washington-Seattle, London’s Natural History Museum and the Anthropologisches Institut and Museum in Zurich, Switzerland.