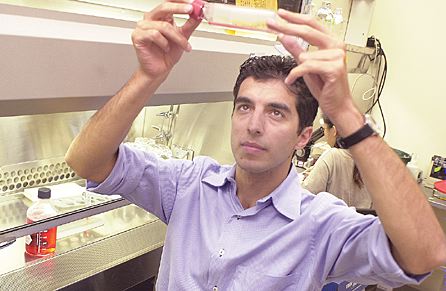 Valter Longo, holder of the Paul F. Glenn Foun-dation Chair in Cellular and Molecular Biology, in his tissue-culture lab. The experiment was tricky to perform, Longo said, “because peroxynitrite is a very short-lived molecule and is very difficult to measure.”

Gerontologists at USC have discovered how the chief molecular villain of Alzheimer’s disease kills nerve cells – and have identified two drugs that appear to cancel its toxicity.

The finding, which was reported in the May 1 issue of the Journal of Neuroscience, is apparently a solid advance in the quest to cure the degenerative brain disease that afflicts roughly 4 million Americans and kills about 100,000 each year.

The bad guy molecule – called the beta-amyloid peptide – has long been associated with the progressive, mind-eroding cell die-offs that AD patients suffer. But the causal chain has been indirect and the list of suspects long.

Instead of directly affecting neurons, the brain’s computing cells, the beta-amyloid stimulates a different kind of brain cell called microglia to release peroxynitrite – a neurotoxin.

Microglia act like janitors, mopping up substances that don’t belong in the brain. However, when beta-amyloid comes along, their response is to release a neurotoxin, which is disastrous for the system they are designed to maintain.

Valter Longo, an assistant professor of gerontology in the USC Leonard Davis School of Gerontology, led the research team that finally identified beta-amyloid’s modus operandi and its accomplices.

“It was a tricky experiment to perform,” said Longo, who holds the Paul F. Glenn Foundation Chair in Cellular and Molecular Biology, “because peroxynitrite is a very short-lived molecule and is very difficult to measure. [But] peroxynitrite appears by far to be the most toxic molecule that is produced in response to beta-amyloid.”

But there is a silver lining: The researchers also identified two drugs that may effectively block peroxynitrite’s toxicity. The next stage of research will be to test these drugs on mice that have been bred to acquire a rodent version of AD, said Longo. If either of the drugs proves safe and effective for the mice, human clinical trials may follow.

longo’s research was supported by the National Institutes of Health and the John Douglas French Alzheimer’s Foundation.

The research was conducted in cooperation with the lab of gerontologist Caleb E. Finch, who holds the ARCO/ William F. Kieschnick Chair in the Neurobiology of Aging.

“Peroxynitrite Mediates Neurotoxicity of Amyloid �-Peptide and Lipopolysaccharide-Activated Microglia” was published in the May 1 issue of the Journal of Neuroscience.

Researchers Identify Alzheimer’s Chief Culprit and How It Kills