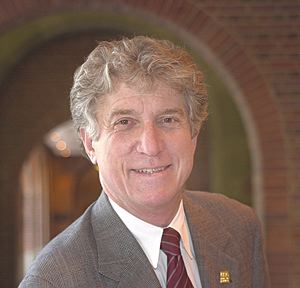 Abdo goes to the Huntington after a 24-year career at the university. He has served as associate vice president since 1994, leading a program that was responsible for gifts of $5 million or more. Gifts of that size constitute more than one-third of the campaign funds raised by USC’s leadership and have included three gifts in excess of $100 million.

He has served as executive assistant to two presidents, Steven B. Sample and the late James H. Zumberge, and as executive secretary to the USC board of trustees.

“George brought deep compassion and human sensitivity to his fund-raising responsibilities,” said Sample. “We are grateful that he invested so much of his career in USC, and we look forward to working with him in his new post.”

As a member of the university’s central advancement staff, Abdo was also responsible for international fund-raising, foundation relations and development communications. As a member of the senior vice president’s cabinet, he participated in the conception, strategic planning, goal setting, and management of the Building on Excellence Campaign.Before joining the USC staff in 1978, Abdo held a number of positions in the nonprofit sector. He served as assistant to the president of the Norton Simon Foundation from 1973 to 1975, and in 1973 was organizing founder of the Southern California Association for Philanthropy, the regional association of philanthropic foundations. From 1978 to 1980 he was assistant director of the USC Office of Research and Program Coordination, advising faculty seeking research and program support from private foundations.

As executive secretary of the board of trustees from 1981 to 1994, Abdo was its chief of staff and organized and managed 13 annual trustee retreats. He also created and edited the first three editions of the USC Trustee Handbook.

“When the trustees and overseers at the Huntington asked me what I was leaving behind at USC, I told them, ‘Twenty-four wonderful years,'” Abdo said. “These years at USC have been enormously satisfying and fulfilling. It has been an honor and a pleasure to work directly with Presidents Steven B. Sample, James H. Zumberge and John R. Hubbard, and to have contributed in some modest way to the remarkable advancement of USC during this period.”

Abdo earned a bachelor’s degree in history from UCLA and a master of divinity degree from Princeton Theological Seminary in 1972. In his years at USC, he pursued a deep interest in the ethics of stewardship at institutions of higher education, leading to a master’s degree from USC in religion and social ethics in 1995 and a Ph.D. in 2000. His doctoral dissertation was entitled “The Ethical Responsibility of Trustees for the Interpretation of Mission in Independent Colleges and Universities.”

He serves as chairman of the board of trustees of the San Francisco Theological Seminary, and is a Fellow of the Society for Values in Higher Education. Abdo founded Drug Rehabilitation Center Inc., the first halfway house for drug abusers in west Florida in 1971. A Presbyterian minister, he has served as both a parish minister and a campus minister.

Abdo’s wife, Sara Campbell, is senior curator at the Norton Simon Museum. His son, David, is a USC Marshall School of Business graduate employed by the Walt Disney Co.’s Buena Vista Music Group. His daughter, Maryanna, is a Trustee Scholar and a senior in the School of Cinema-Television who will graduate May 10. She has won a $10,000 Renaissance Scholar prize and has been selected for a Fulbright Fellowship.