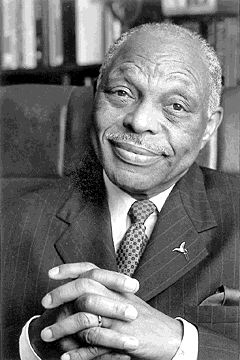 The Rev. Cecil “Chip” Murray will receive an honorary doctor of humane letters degree, honoris causa, at USC’s 119th commencement ceremonies on May 10.

As part of his effort “to take the church beyond its walls,” Murray established a major community-outreach program. All of First AME’s members are required to join one of roughly 30 task forces that help in a number of areas, including homelessness, education and substance abuse.

Their accomplishments include the creation of a $5-million transportation program for seniors and the handicapped and programs that have provided free tutoring, legal aid and computer training to members of the local community, he said.

“USC did not run from the surge of need that exploded around it. Rather, it went out to meet the need,” he said. “The truth it expounded did not take wings, but roots, leading to programs that reached beyond culture, class, color and caste to all concerned.”

A Floria native, Murray earned his undergraduate degree from Florida A&M University in 1951 and served 10 years in the U.S. Air Force, first as a jet radar intercept officer for the Air Defense Command and later as a navigator with the Air Transport Service.

He was awarded the Soldier’s Medal for Valor in 1958 for trying to save a fellow flight-crew member’s life following an explosion in Murray’s two-seat fighter jet.

He retired as a reserve major and went on to earn a doctorate in religion from the Claremont School of Theology in 1964.

He was a key figure calling for calm in the 1992 Los Angeles riots, leading his parishioners to form a protective line for police and firefighters against rock throwers.

“This makes the arduous sacrifices seem worthwhile. This puts the battle in focus, the arena in perspective,” he said. “This, coming from the top of the line, is a foretaste of glory divine,” he said.