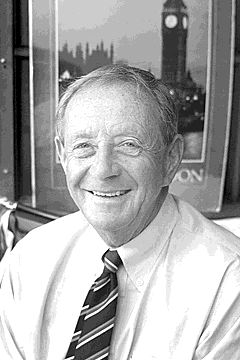 For the last 10 years, University Marshal John Callaghan has made sure that 8,500 USC graduates were in the right place and on time for commencement.

That achievement – made possible by support from all the academic units at USC, he notes – is more remarkable to him than the year-round planning that goes into USC’s biggest ceremony of the year.

“To me, one of the marvelous things is that from 8:30 a.m., when we start the actual procession, to 5 minutes to 9 we have 8,500 students in their places. That’s the [commencement] marshals – they do a terrific job.

“Last year, we had everything ready in 22 minutes. President Sample and the rest of the academic party were marginally late because of the wretched efficiency of all the others,” Callaghan said.

Callaghan, associate professor of kinesiology in the USC College of Letters, Arts and Sciences, is an expert on sports psychology, sports ethics, world soccer and rugby. Born and raised in Liverpool, he joined the Royal Air Force and later graduated from the University of London Institute of Education.

Callaghan maintains a seemingly stress-free attitude toward the Big Day. “It’s delightful on the day of commencement to see everybody having such a good time,” he said.

“Previously, exams went right up to Thursday night. It was a little crazy; it’s much better to have breathing space, and that’s allowed us to have ceremonies and so on.”

Latino and African-American student associations each sponsor ceremonies on the eve of commencement as well, and “that’s been very successful,” Callaghan said.

Each year, the university’s 50-year alumni class is honored; this year, the Class of 1952 will march in the processional.

Two large-screen Jumbotron televisions have been placed in Alumni Park in recent years to let friends and family in the back of the park see commencement more clearly.

Last, but not least, vocalists from the USC Thornton School of Music have been enlisted to lead the audience in the National Anthem and the Alma Mater, Callaghan said.

“Before, it was an awfully disorganized bunch of voices from the audience.”