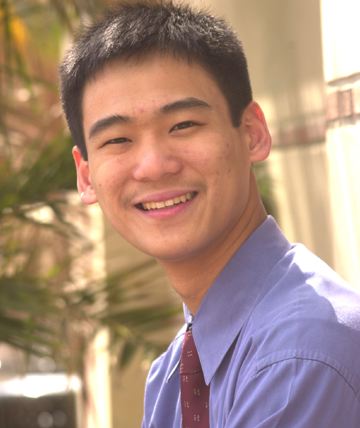 When Stanley Chou learned that students at Francisco Bravo Medical Magnet High School often scored too low on their SATs to qualify for USC, he did something about it.

“Here we had a medical magnet high school right beside the Keck School of Medicine, and a lot of the students couldn’t go to USC,” said Chou. “So we decided to start a mentoring program.”

Chou and several other USC students began weekly visits to tutor Bravo students one-on-one for the SAT. Before long, Chou said, the role of the USC mentors began to change.

“We became counselors and helped the kids with the admissions process. We helped them choose the colleges” to apply to.

Chou, who will receive a B.S. in biomedical engineering and a B.A. in psychology on May 10, is the Class of 2002 valedictorian. He has maintained a 4.0 GPA during his four years as a Trojan.

“I was very excited and surprised to be chosen because there are so many talented students,” he said. “It’s an important honor. I want to say something that all students can relate to.”

Chou, whose hometown is Irvine, received a University Trustee Award at Convocation this year and has been designated a Renaissance Scholar for his study in disparate fields. He is a member of Phi Beta Kappa, Phi Kappa Phi and Alpha Lambda Delta Honor societies. He was president of the USC chapter of Golden Key International Honors Society his junior year and is finishing his term as Golden Key Council student representative, the highest student position internationally.

“We were learning about stuff like schizophrenia, only this time we were down to the cellular level,” said Chou, who plans to attend one of California’s medical schools. “I definitely want to practice medicine because I love interacting with patients. But I also see myself doing research.”

Since October 1999, Chou has been working on a research project concerning the relationship between neophobia and learning, using rats and a maze.

“Neophobia is a fear of new stimuli or new things in general,” he explained. “If the rat is neophobic, it has difficulty learning a new task.”

While still in high school, Chou began playing piano with the Young Musicians Guild, an organization promoting classical music with performances and discussions about composers at senior centers, community colleges, convalescent homes and other venues. His favorite composer is Frederick Chopin.

Chou was chair of the USC Philanthropy Fund Board in 2000 and 2001, when it was responsible for distributing $84,000 for student service activities. The same year, he was director of community affairs for the USC Student Senate, a position he initially thought involved community service.

“Instead, I was meeting with local community leaders and talking about the development of University Village. It was the mom-and-pop restaurants, which I really like, vs. bringing in the chains,” he said.

And what was Chou’s most memorable Trojan experience?

“Going to my first football game. It had never occurred to me to go to a game before, and it was so much fun,” he said. “My entire USC experience has been a lot of fun.”