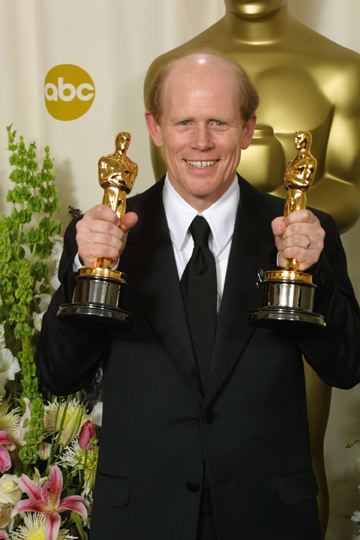 USC alumnus Ron Howard with his Best Director and Best Picture Oscars for “A Beautiful Mind.”

USC alumnus and Academy Award-winning director Ron Howard will deliver the address at the 2002 USC School of Cinema-Television satellite graduation ceremony May 10. Fellow alumnus Stacey Sher will accept the Mary Pickford Alumni Award for her work as a producer.

“As a direct beneficiary of USC’s unparalleled filmmaking program,” Howard said. “I am especially honored to deliver the commencement address to the graduating class of 2002.”

“Each year a sense of closure accompanies commencement and is quickly met with an air of anticipation,” said USC School of Cinema-Television Dean Elizabeth Daley. “It’s thrilling to imagine that we may be sending the next Ron Howard or Stacey Sher into the Hollywood community; they exemplify the commitment to creativity, professionalism and character that we hope to instill in every student.”

Howard’s long list of acclaimed films – such as “Apollo 13,” “Backdraft,” “Cocoon,” ” Far and Away,” “The Grinch,” “Parenthood” and “Ransom” – have won the hearts of audiences around the world and have earned him two Directors Guild Awards. After 25 years in the director’s chair, Howard took home his first Best Director Oscar in 2002 for “A Beautiful Mind” – which also won the year’s award for Best Picture.

While inspiring moviegoers and filmmakers through his work behind the camera, Howard has also been committed to the education of tomorrow’s industry leaders. Most recently, he and his wife, Cheryl, funded the Ron Howard Screening Room in USC’s new Robert Zemeckis Center for Digital Arts.

Sher is a 1985 graduate of the Peter Stark Producing Program. She has produced and/or executive produced more than 15 films in her career, including multiple Academy Award nominee “Erin Brockovich,” “Man on the Moon,” “Living Out Loud,” “Out of Sight,” “Gattaca,” “Get Shorty,” “Pulp Fiction” and “Reality Bites.”

First bestowed upon Robert Zemeckis in 1995, the Mary Pickford Alumni Award is presented to an alumnus who personifies Pickford’s spirit and legacy as an Academy Award-winning actress, astute businesswoman and original co-founder of United Artists. Past recipients of the award include Alan Ladd Jr., Michelle Manning, Walter Murch, David Wolper and Laura Ziskin.