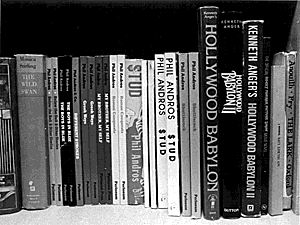 USC Libraries have signed an agreement with the ONE Institute toprovide university space for the institute’s renowned archives, acting libraries director Lynn Sipe has announced.

The collection consists of more than 2 million items relating togay and lesbian people, their history and culture. Included inthe collection are books, periodicals, pamphlets, photographs,posters, slides, films and videotapes, clothing and othervintage materials, as well as historical documents and artifactsfrom the women’s movement. The collection is the library’s firststep toward establishing the Gender Studies Archive at USC.

The ONE Institute’s archives also include historical materialsfrom the women’s suffrage movement as well as early gay rightsmovements in the United States and around the world. There arehistorical materials about gay and lesbian politicians, writers,artists, musicians, scientists and other international figuresprominent in the days when society was far less accepting oflesbians and gays. The archives also document the involvement oflesbians as leaders in the women’s and civil rights movements.

The collection is “wonderfully complementary to our standardprint holdings and vastly increases the research materials atour disposal,” Sipe said.

Depositing the materials at USC will provide, for the firsttime, a large facility to enable the public and scholars to usethe archives, said John O’Brien, acting president of the ONEInstitute.

“We’re very excited about this and grateful to USC for providingthe building,” O’Brien said. “It gives us the opportunity toexpand our educational services and programs, as well as topreserve and maintain a unique collection. There aren’t many places where one can get material and information on the gay and lesbian experience, either in the United States or around the world.”

ONE Institute and USC officials hope to begin moving the archival materials to their new home on the University Park Campus this month. The archives will be maintained by institute staff members and volunteers in cooperation with USC Librariesstaff volunteers.

The archives actually represent the merger of two large collections: the International Gay and Lesbian Archives and ONEInc.’s Blanche Baker Memorial Library. These collections havebeen dispersed in several Los Angeles buildings, and displayspace has proved inadequate. The collections were recentlybrought together and are now administered by the ONE Institute.

Negotiations are under way with other private organizations tosecure additional significant collections for USC’s GenderStudies Archive.

The International Gay and Lesbian Archives were founded in 1942by Jim Kepner in San Francisco. ONE Inc.’s collection has beenin existence since 1952, when the corporation was formed topublish ONE – the first public magazine published by and forhomosexuals – as well as to develop a library and archives. Itscollection includes all back issues of ONE.

The former director of USC Dornsife’s Joint Educational Project was a passionate supporter of partnerships between universities and their communities.

He was an award-winning author and a prolific political journalist for The New York Times, New York magazine and Esquire.

A gateway to gender studies