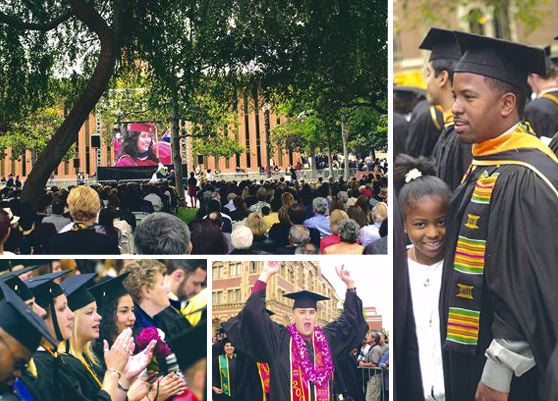 The usual graduation themes of dreams for the future and post-graduation reality played out at USC’s 119th commencement May 10, as flower-draped graduates and their friends and families listened to speakers, sang the “Alma Mater” and gathered at Tommy Trojan one more time.

But a specter was present as well.

Members of USC’s Class of 2002 were a few weeks into their senior year Sept. 11 when the United States suffered its worst terrorist attack ever, and the event – and the USC community’s reaction to it – tempered the upbeat messages of the day.

“Your own confidence in your future is clouded slightly by the fact that you graduate into a dramatically changed America, one which has been challenged by the cruelest kind of terrorism, and which is in a kind of suspended state between war and peace,” said main commencement speaker David Halberstam, the Pulitzer Prize-winning journalist and author.

“The events of Sept. 11 tested our nation, they tested our communities and institutions,” said USC President Steven B. Sample. “And it is in times of testing that true strengths are revealed.”

At commencement, Sample conferred bachelor’s, master’s and doctorate degrees on more than 8,500 graduates. Alumni Park overflowed with graduates and guests – more than 25,000, by official estimates. From the “Commencement Fanfare” by the USC Band under Arthur C. Bartner, through the processional march, the singing of the National Anthem and “Alma Mater,” and finally, “Conquest,” the band’s signature, it was a day of music and pageantry, balloons and flowers, sidewalks crowded with robed graduates and proud family members strolling between graduation sites and receptions.

Honorary degrees were awarded to four leaders who have helped shape Los Angeles: Robert A. Day, whose W.M. Keck Foundation made the naming gift to the Keck School of Medicine of USC; philanthropist and retired Gen. William Lyon, one of the leading home builders in the country; Cardinal Roger Mahony, head of the largest archdiocese in the country; and the Rev. Cecil “Chip” Murray, who has led his socially active First AME Church congregation in playing a major role in the community.

Valedictorian Stanley Chou, a pre-med student with a 4.0 GPA, offered the traditional call to graduates to realize their dreams, but added some wistful advice: “Make good memories. Life is about making memories – from our first step to our first kiss to our first Trojan football game.”

Halberstam, who earned his 1964 Pulitzer for his fearless coverage of the Vietnam War, touched on the events of Sept. 11 but focused on urging graduates to find a career they love, not one that merely pays well.

“For, other than the choice of a lifetime partner, nothing determines happiness so much as choosing the right kind of work,” he said. “If you want to be a botanist, poet, actor, teacher or nurse, if that’s what your heart tells you to do, don’t go to law school or some other graduate school on the theory that it’s a great ticket.”

Sample, in his speech, reminded graduates that USC responded to Sept. 11 with teach-ins, class discussions, seminars and soul-searching. “In many ways, there was no better place to be than at this university, as we sought to come to terms with what had happened,” he said.

The tragedy “brought us closer together,” Sample said; “we gained a new appreciation for diversity and tolerance”; and “most important, the events of last September presented us with the opportunity to purse the great work of a university – which is to know and understand, to take the raw material of experience, to interrogate, to interpret, to apply the lessons of the past.”

After the main ceremony, graduates and guests fanned out to the two dozen satellite ceremonies for individual schools, where they heard additional speakers – entertainment celebrities, CEOs, deans and school valedictorians – and received their diplomas.

At the School of Theatre ceremony, Meghan Finn, representing the school’s B.A. recipients, recalled Sept. 11 as well. “I, who have been ferociously independent for so long, felt very small and far from home,” she said. What got her and her fellow students through that day and the ones that followed, Finn said, was doing “what you have to do – pick yourself up and go to rehearsal.”

Inga Kiderra contributed to this story.

Class of 2002 Celebrates, Reflects on a Changed World