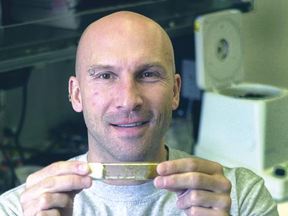 John Tower, associate professor of biological sciences, holds a container of fruit flies. For the experiment, researchers created flies that had an extra copy of either of two antioxidant-producing genes. Then they arranged to control whether the extra gene was on or off, like a light switch.

STRONG EVIDENCE HAS finally arrived for the long-held theory that the very oxygen we require to live is also the prime agent of old age and death.

The validation of the so-called “oxidative stress” model of aging comes from a set of experiments that boosted the life span of flies in direct proportion to the production of antioxidants by specially manipulated genes. The finding is reported in a study by researchers from USC and UC Irvine that will run in the June issue of the journal Genetics.

Antioxidant substances such as vitamin E, C or beta carotene are thought to protect body cells from the damaging effects of oxidation by neutralizing free-oxygen radicals, which are charged molecules that cells produce when they burn their oxygen fuel. These radicals are destructive to DNA, protein and the other complex, delicate molecules that carry out life’s every function.

BIOLOGISTS HAVE long surmised that the whips and scorns of time – arthritis, dementia, cancer and all the rest – are caused in part by a steady accumulation of such damage.

To test this theory directly, the USC-UC Irvine researchers created fruit flies that had an extra copy of either of two ancient, antioxidant-producing genes known as superoxide dismutases,”or “SOD.” They arranged to control whether the extra gene was on or off, like a light switch.

IN THE EXPERIMENTAL flies, the researchers activated the extra copy, causing the flies’ cells to produce far more antioxidant enzymes than normal. These flies enjoyed a longevity boost of up to 40 percent, said lead researcher John Tower, an associate professor of biological sciences in the USC College of Letters, Arts and Sciences’ molecular and computational biology program. And the magnitude of the boost was exactly proportional to the amount of extra SOD production.

The researchers were able to turn the expression of the SOD gene on permanently simply by warming the young flies’ enclosure for a couple of hours, said Tower.

First, the experimental and control fruit flies had identical genetic backgrounds. Thus, the only difference between them was the expression or non-expression of the extra SOD gene, which the experimenters could turn off or on.

Second, the SOD genes were activated only after the flies reached maturity. Had they been active during development, they could have been setting up systemic differences between experimental and control flies. But the longevity boost correlated perfectly with SOD over-expression in adult flies, proving that the antioxidants were directly responsible, Tower said.

“It demonstrates that antioxidant activity is a rate-limiting factor for fly lifespan,” he said.

The researchers further proved that this lifespan extension was not being bought at the price of a more sluggish or less-active life. Tower’s co-investigators at UC Irvine, led by comparative and evolutionary physiology professor Timothy Bradley, showed that the long-lived flies used just as much oxygen over the course of their lifetimes as their shorter-living brethren.

“There was no negative effect on metabolism from the SOD over-expression,” Tower said. “So we’e extending life span without some kind of trade-off or deficit in the creatures’ metabolism.”

Does this mean we should all start taking antioxidant supplements every day along with our vitamins?

“From what my colleagues tell me, dietary antioxidants haven’t proven very effective. No one is sure why yet. Is it because they aren’t making it into our cells? Is it because the body senses the increase and down-regulates its own endogenous [internal] production in response?”

But now at least, said Tower, it’s known that the beneficial effects of antioxidants occur when the genes are made to supply the substance.

Drugs or gene therapy might some day be used to stimulate human cells to over-express SOD or similar genes, he said, though it won’t happen soon.

The work was supported by grants from the Department of Health and Human Services, National Institute on Aging and National Science Foundation.

Oxygen and Life: It Really Does Giveth and Taketh Away