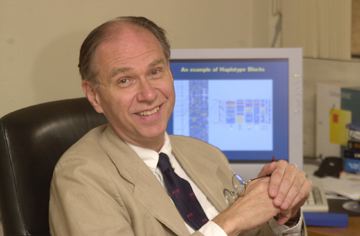 University Professor Michael S. Waterman has been named one of eight recipients of the 2002 Gairdner International Award.

University Professor Michael S. Waterman was named one of eight recipients of the 2002 Gairdner International Award on April 23.

Now in its 43rd year, the annual award is bestowed for outstanding contributions by medical scientists whose work will significantly improve the quality of life. This year’s honorees are all top contributors to the field of genomics research.

Waterman is the USC Associates Professor of Mathematics and Natural Science and a professor of mathematics, biological sciences and computer science. He is often called the father of computational biology – which is the modern marriage of computer science, statistics and molecular genetics that is paving the way toward a future era of biomedical wonders, many scientists believe.

“Mike Waterman is richly deserving of the Gairdner Award,” said Joseph Aoun, dean of the USC College of Letters, Arts and Sciences. “And it is fitting that he shares it with others who, like him, are largely responsible for the dramatic leaps in understanding that have been achieved in the field of genomics.

“He has brought his brilliance into play at USC and made this university a world leader in the drama of genomics that is now unfolding. Mike and his colleagues in computational biology will continue to be heard from, and their contributions will serve well both scholarship and human health.”

Waterman’s mark appears behind many of today’s standard procedures of computational biology, said David Eisenberg, professor of molecular biology and director of the UCLA-Department of Energy Laboratory of Structural Biology and Molecular Medicine. “His work has advanced biological sequence analysis from a collection of ad hoc procedures to a rigorous and mature subject.”

Probably his two most notable achievements are the Smith-Waterman Algorithm, which remains the gold standard for gene and protein sequence analysis and is the keystone of computational genetics, and the Lander-Waterman Algorithm, which was the foundation of Celera Genomic’s much-publicized sprint to sequence the human genome months in advance of the public-funded Human Genome Project.

Interestingly, two of the other Gairdner awardees this year are Eric S. Lander, MIT, of “Lander-Waterman,” and J. Craig Venter, president of Celera Genomics, Rockville, Md.

Each of the eight scientists will receive $30,000 and will accept the award at a gala dinner in Toronto on Oct. 24.

In addition, the Gairdner International Award of Merit was bestowed on James D. Watson, the Nobel Prize-winning co-discoverer of the double-helix structure of DNA and now president of the Cold Spring Harbor Laboratory in New York.

Of the past 255 Gairdner International Awardees, 56 have gone on to win a Nobel Prize.