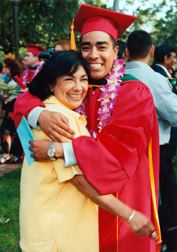 It is customary for a newly designated Doctor of Medicine degree recipient to recite the Hippocratic oath and affirm his or her commitment to the medical profession.

On May 19, 160 graduates from the Keck School of Medicine of USC stood in front of their families and friends and vowed to be ethical in practice and compassionate in the treatment of their patients. It was the school’s 117th Commencement ceremony, held at the Shrine Auditorium.

Samuel Shem, author and psychiatrist on the faculty at Harvard Medical School, gave the keynote address. His first novel, The House of God, was called “the best novel ever written about medical internship – a classic,” and was named by The Lancet as one of the two most important American medical novels of the century.

Special guests included USC Trustees from the Leventhal and Tappen families, as well as 50th Year Alumni from the class of 1952.

At a preceding celebration on May 18, Ryan presided over the Senior Awards Ceremony at the HSC Quad. Presented by Taylor and Peter Katsufrakis, associate dean for student affairs, awards were granted to outstanding Doctor of Medicine candidates on the basis of excellence in academic achievement, research and service.

The Dean’s Scholars for Academic Excellence in the Junior/Senior Continuum and inductees into the Alpha Omega Alpha Honor Medical Society, a distinction limited to 15 percent of the class for outstanding academic performance and leadership, were also recognized.

Several named honors were given out to exceptional candidates based on criteria determined by the awarding committee. A poignant moment came when the Frederick Napier Elliott Award was given to graduate Abby Heather Close by alumnus Timothy Charles Nicely, class of 1977.

Frederick Napier Elliott was a former professor of community medicine who started the first family practice residency at the Keck School.

Elliott, who died in 1980, was “committed to improving the lives of the people he touched,” said Nicely.

Elliot’s students established the award to honor his memory and recognize a student who embodied “a blend of compassion, insight, honesty and appreciation for the technology of medicine.”

Keck graduates pledge commitment to medicine at the 117th commencement