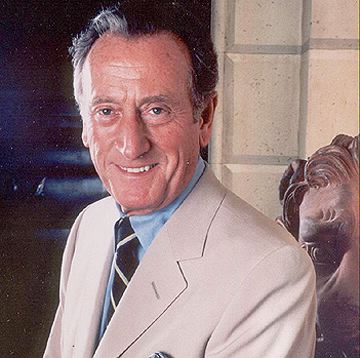 James Edward Hanson – retired chairman of global conglomerate Hanson PLC and a member of the British House of Lords – has been named an honorary trustee of the University of Southern California.

Hanson built his company, originally the Oswald Tillotson Ltd., into an international presence with interests in areas including gas, electricity and vehicle distribution, coal mining and building materials. He retired in 1997.

“We are pleased and honored to have Lord Hanson with us on our board of trustees,” said USC President Steven B. Sample. “He’s a remarkable man.”

Hanson joined the British Army in 1939 at the age of 17 and left in 1946, holding the rank of acting major. He went to work for the family’s logistics company and managed its Canadian interests in Ontario from 1949 to 1963.

Hanson built Hanson PLC into one of the largest British-owned conglomerates through a partnership with the late Lord Gordon White, who died in 1995.

In 1995, Hanson PLC consolidated 34 of its companies in the United States, and the new company was named U.S. Industries Inc. Together with its subsidiaries, the corporation manufactured and marketed bath and plumbing products in North America under brand names such as Jacuzzi, Sundance Spas and Rainbow.

When Hanson retired the following year, he became a lecturer and frequent contributor to newspapers and magazines.

He is a former director of Lloyds Bank and is currently a director of Hanson Capital Limited. He is also former chairman of Trident Television Limited and founder of the London radio station Melody FM.

Hanson founded the Hanson Fellowship of Surgery at Oxford University and is a member of the Court of Patrons of the Royal College of Surgeons of England.

Through the Hanson White Foundation he founded with his former business partner, Hanson gave financial support to the Keck School of Medicine of USC in 1995 to support urology research programs and create the Hanson-White Chair in Medical Research.

He and his wife, Geraldine Kaelin, live in London and have two sons, Robert and Brook.