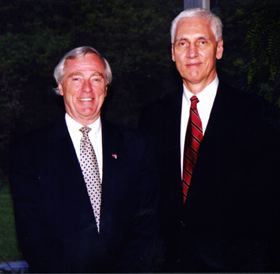 The Upstate Medical University of the State University of New York (SUNY) gave USC gene therapist W. French Anderson an honorary degree on May 19 at the university’s 168th annual commencement ceremony in Syracuse.

Anderson is director of the Gene Therapy Laboratories and professor of biochemistry and pediatrics at the Keck School of Medicine of USC.

The Honorary Doctor of Science degree was awarded to Anderson by Gregory Eastwood, the university’s president, for Anderson’s ongoing work in gene therapy and genetic engineering.

It is Anderson’s third honorary degree. Anderson headed the team that carried out the first approved gene therapy clinical trial and is recognized as an innovator in the area of human gene transfer.

His current focus is on the development of advanced gene therapy delivery systems.

As part of the degree ceremony, Anderson gave remarks to the nearly 400 graduating students of the university’s colleges of medicine, health professions, nursing and graduate studies. Upstate Medical University is the second oldest academic medical institution in New York.