Business opportunities strike at unexpected times and to unlikely people.

Consider Ryan Verbiest of Manhattan Beach, who was 12 years old last winter when a clever idea occurred to him. It was in the days leading up to the 2009 Rose Bowl, and Verbiest – a fervent Trojan fan who hopes to be the fourth generation in his family to attend USC – was skiing with his family at Mammoth Mountain. 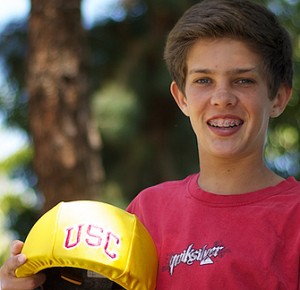 Young Trojan fan Ryan Verbiest has created and marketed a helmet cover with the USC logo on it.

He wanted to show his USC colors and was upset that he was not wearing any USC gear to support his team.

“I wish I could have worn a hat skiing, but I was wearing a helmet,” he recalled.

He and his two brothers and sister saw some skiers wearing knit USC caps under their helmets, and that stuck them as ineffective, since the logo could barely be seen.

Inspiration then struck. Why not make a helmet cover with the USC logo on it, Verbiest thought. It could fit on all types of sporting helmets – skiing, skateboarding and biking.

With help from his mother, Stacy Verbiest ’88, who had just finished a job as an importer and distributor of Italian clothing, Verbiest launched a company, Active Helmets. He also joined Lids on Kids, a national nonprofit associated with the National Ski Areas Association, that is dedicated to promoting helmet safety.

The covers are made locally, and the fledgling company now offers 90 designs and colors, including 14 different USC styles.

Other university bookstores have purchased them (including USC, UCLA, the University of California, Berkeley, Stanford, Fresno State and San Diego State), and Verbiest and his mother are working on getting the schools’ ski teams as accounts, as well as private ski schools. The covers also are being marketed as promotional items for conventions and corporations.

College students, however, remain a market with huge potential. Only 20 percent of bike riders, skateboarders and skiers ages 18 to 22 currently wear helmets, according to Stacy Verbiest.

New designs are introduced seasonally, with the 13-year-old founder giving input on color and pattern choices.

“I know what kids these days wear,” he said.

Profits from the 800 units sold thus far have been plowed back into the company, but orders for the fall are flowing in, and mother and son estimate that the company will ship 10,000 units this year.

The USC covers are licensed by the university and for sale at the Trojan Bookstore and online at www.uscbookstore.com or www.activehelmets.com

The outgoing eighth-grader, who said his favorite school subject is math, is involved in the day-to-day operation of the business. He types letters, helps pack boxes and rushes them to the UPS store on his bike or skateboard – always wearing a helmet with a snazzy cover, of course.

Through 12 years of hard work — first as a participant in USC’s Neighborhood Academic Initiative, then as a USC Roski art student — Dayanara Saucedo kept one special person in mind.

A USC entrepreneur at age 13