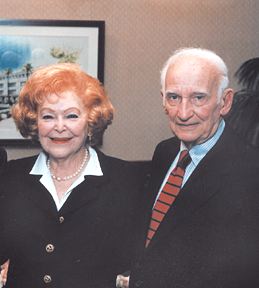 Virginia and Simon Ramo have served as advisers to four USC presidents.

On March 19, Simon and Virginia Ramo will be honored with the university’s highest award, the USC Presidential Medallion, at the 21st annual Academic Convocation ceremony, in Town and Gown.

He is a scientist, industrialist, educator, author and the “R” in TRW. She is a former teacher – who wanted to be a banker – and a patron of the arts, medicine and education.

She played saxophone in the Trojan band and performed with a women’s orchestra. Later, she served on the executive committee of the Los Angeles Opera Association, and a music building at USC bears her name. He’s a serious violinist who plays on a 1730 Lafont Joseph Guarnerius del Gesu and was a trustee of the National Symphony in Washington, D.C, and a board member of the Los Angeles Philharmonic.

Virginia was elected to the USC board of trustees in 1971, and is now a life trustee. While she served on the board, Simon acted as an adviser to USC’s senior administration.

In 1999, in the renaming of the Keck School of Medicine of USC, Simon Ramo, as a director of the W.M. Keck Foundation, played a leading role in securing the $110 million naming gift for the university.

“There can be no more deserving individuals than Si and Virginia Ramo for the Presidential Medallion,” said Stephen J. Ryan, dean of the Keck School. “It is impossible to list their many contributions. In one of their most recent, they accepted the charge from President Sample and Keck Foundation Chairman Robert Day to be co-chairs of the board of overseers and proceeded to recruit a distinguished board that has been essential to the remarkable success of the Keck School and key to its bright future.

“Virginia has served with distinction as a USC trustee and helped many schools, as well as the USC Libraries. In my world, she was essential to the success of the Doheny Eye Institute and its board of directors by recruiting its board, including our past chairman, Sid Webb.

“Si has been a source of information and inspiration. He always asks the right questions to keeps us focused,” said Ryan.

In 1971 the couple established the annual Ramo Music Faculty Award, given to a faculty member in the USC Thornton School of Music who has made an outstanding contribution through teaching and professional work in music. It is the highest honor a music faculty member can receive, and the recipient is recognized at the school’s annual honors convocation in May.

“We are eternally in the debt of Virginia and Si Ramo,” said Larry Livingston, dean of the USC Thornton School. “Virginia has not only been a generous benefactor, but equally, if not more important, the resonance of her spirit in our corridors has been an inspiration for everyone who has ever been a part of our school.”

Together, the Ramos have served as advisers to four USC presidents, including President Steven B. Sample, who could not be more enthusiastic about the Ramos’ enduring commitment to USC.

“The Ramos are longtime supporters and benefactors of USC whose contributions – both intellectual and financial – have enriched the lives of students and faculty,” said Sample. “USC wouldn’t be where it is without them.”

Simon Ramo co-founded TRW Inc., a Fortune 500 company and one of the world’s largest technological corporations, in 1958, with a merger of Ramo-Wooldridge Corp. and Thompson Products. After more than 40 years at the helm, Ramo now serves as director emeritus.

He is the recipient of the Presidential Medal of Freedom, the nation’s highest civilian award, and the National Medal of Science, the top recognition for science, and has been inducted into the Business Hall of Fame. In 1972, USC awarded him an honorary doctor of laws degree.

After graduation, he joined General Electric. (Besides wanting an electrical engineer, they recruited him as a concertmaster for New York’s Schenectady Symphony, which the company supported.)

By the age of 30, he held more than two dozen patents in electronics.

In 1946, Ramo took leave from GE, established Hughes Electronics and served as an adviser to the USC School of Engineering.

Chief scientist in the development of the nation’s intercontinental ballistic missiles, Ramo was one of the country’s top experts in guided missiles. As the leading civilian contributor to this program, he earned a special citation of honor from the Air Force.

He is a fellow of the Institute of Electronic and Electrical Engineers, American Physical Society, American Institute of Aeronautics and Astronautics, and the American Academy of Arts and Sciences.

Ramo is a trustee of Caltech, where he has been a research associate, and a fellow of the faculty at the Kennedy School of Government at Harvard.

Ramo has written widely on technology and society. He published the first book on microwave electricity in 1943. His books include “The Management of Technological Corporations,” “Cure for Chaos” and “The Islands of E, Cono & My,” which examined the economic problems of the world. He gave royalties from his 1977 best-seller, “Extraordinary Tennis for the Ordinary Player,” to USC.

In 1982, the IEEE established the Simon Ramo Medal to recognize significant contributions in systems engineering and systems science. To date, 13 medals have been awarded.

As an undergraduate, Virginia Ramo worked her way through USC by playing in a women’s orchestra. But music – although it was to remain a lifelong interest – gave way to other ambitions, and upon graduation with a B.S. in education in 1937, she taught high school in Schenectady, N.Y., where husband Simon had landed with GE. The Ramos married in 1937 and have two grown sons, James and Alan.

She founded the Achievement Rewards for College Scientists scholarship program chapters in Chicago and Denver, and served as ARCS’ national president in 1978.

As a USC trustee, she has served on numerous committees, including the student affairs committee, where she helped to select Trustee Scholars. “They’re all so bright and deserving and hopeful,” she said in a USC Chronicle story, lamenting that all the applicants could not receive scholarships.

Groundbreaking began in 1973 for the three-level Virginia Ramo Hall of Music. The Ramo endowment made the building a possibility, and two studios were designed for classes taught by violinist Jascha Heifetz (a close friend of the Ramos’, who helped them select their Steinway grand) and cellist Gregor Piatigorsky.

In 1979 she was honored by the Thornton School of Music’s Alumni Association for her support of the school and its performing arts programs, and she has served on the board of councilors of three schools that she once called “my special loves”: performing arts, engineering and medicine. That same year, she made it possible for the USC Chamber Singers to tour in Australia.

In 1978, the university awarded her an honorary doctor of humane letters degree.