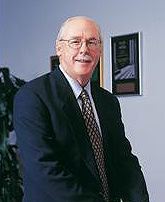 Daniel J. Epstein: “Giving back to USC in a meaningful way fulfills a lifelong dream.”

Eager to give back to the school that helped launch his career, San Diego real estate manager, developer and entrepreneur Daniel J. Epstein ’62 has given $10 million to the USC School of Engineering to establish the Daniel J. Epstein Department of Industrial and Systems Engineering.

“I couldn’t have achieved what I have without the education in industrial and systems engineering I received at USC,” said Epstein, who is chairman and chief executive officer of the ConAm Group of Companies, a real estate organization operating in 250 U.S. cities.

“USC has really been important to me, and giving back to USC in a meaningful way fulfills a lifelong dream.”

USC School of Engineering dean C.L. Max Nikias said Epstein’s benefaction was the largest-ever naming gift to either a USC academic department or to any other American university industrial and systems engineering department. He praised Epstein’s generosity.

“Dan is a true Trojan who cares about USC, about the School of Engineering and, most of all, about his own academic department,” said Nikias. Epstein joined the advisory committee for the schools’ industrial and systems engineering department in 1996, becoming chair three years later.

When Nikias was chosen as the new engineering dean last year, Epstein said he was captivated by the new dean’s plan “to lift USC into the ranks of the nation’s elite engineering schools by raising up individual departments.”

His gift goes into the school’s endowment fund, with some monies allocated to establish two named chairs and to recruit new junior faculty for the industrial and systems engineering department.

In addition to renaming the industrial and systems engineering department, the department has also redesignated its annual management award as the Daniel J. Epstein Engineering Management Award.

Epstein’s commitment to his alma mater is a longstanding one. He serves on the executive committee of the USC Lusk Center for Real Estate Development and the Board of Governors of the USC Alumni Association. He is also a member of the USC Presidential Associates and the Board of Councilors for the engineering school. He received the USC School of Engineering Alumnus Award in 1994.

In February 2002, Epstein became a member of the USC Board of Trustees. Announcing his election, President Steven B. Sample praised Epstein’s strong allegiance to the university.

“Dan Epstein will be a thoughtful and visionary addition to our board of trustees.” Sample said. “As an alumnus, he has a deep commitment to this university and its mission. We look forward to his leadership.”

Epstein founded ConAm in 1975. Based in San Diego, the company is among the country’s top 10 apartment management/ ownership firms, operating 50,000 apartments throughout the United States.

Committed to private-sector community involvement, Epstein is active in numerous civic and charitable activities. He is currently a director of the National Multi-Housing Council and the Stevens Cancer Center in La Jolla, Calif., and is a member of the Chief Executives Organization and the World Presidents Organization. Epstein previously served on the boards of trustees of Scripps College in Claremont, Calif., the San Diego Symphony and the San Diego U.S. Olympic Training Center.

Epstein and his wife, Phyllis, live in La Jolla. Their two children, Julie MPA ’93 and Michael ’94, are both USC graduates.

As USC closes the books on one of the most successful fund-raising efforts in the history of American higher education, many of the university’s individual academic units are building on the tremendous momentum generated by the Building on Excellence campaign. Both the Keck School of Medicine of USC and the USC College of Letters, Arts and Sciences have launched ambitious initiatives to recruit new faculty and build new research space. Other units, as well, are stepping up to the plate.

Recent gifts to the university include:

• The John S. and James L. Knight Foundation gave a $1.5 million grant to create the Knight Chair in Media and Religion within the USC Annenberg School for Communication.

• The Gene Raymond Trust has pledged $500,000 to the USC Thornton School of Music to create the Jeanette MacDonald Recital Hall, part of the school’s initiative to improve the performance environment within the Raubenheimer Music Faculty Building.

• Robert Dockson MS ’40, PhD ’46 was honored by the John Randolph Haynes and Dora Haynes Foundation with a $50,000 donation to the Robert R. Dockson Endowed Scholarship at the USC Marshall School of Business.

A couple gives $4 million to the USC Lusk Center for Real Estate to establish a new institute for the study of California’s infrastructure.

Michael and Linda Keston are of a single mind when it comes to the importance they place on education, philanthropy and social responsibility. These values recently converged in the form of a $4 million gift to the USC Lusk Center for Real Estate to establish the Keston California Infrastructure Institute, the first university-based research institute to address infrastructure issues in the state.

Michael Keston, chairman and CEO of the real estate investment firm The Larwin Company, first explored issues related to infrastructure while serving on the California Regional Water Quality Control Board for Los Angeles and Ventura counties and on the Los Angeles Department of Water and Power Board of Commissioners. He believes the infrastructure concerns facing the state are pressing ones.

“California’s population will increase from 35 million to 45 million by 2025, and everyone’s quality of life is going to be affected negatively unless our state allocates more funding to build infrastructure to accommodate the next 40 years of growth,” he said.

The Kestons felt that USC would be the ideal location for an infrastructure institute. “USC has a creative, receptive administration that can take the institute forward, as well as the academic freedom and broad view to really look at issues of infrastructure and devise effective means for addressing them across all political constituencies,” said Keston, who is an adjunct professor in the USC School of Policy, Planning, and Development.

“This is a groundbreaking step. There is no other institution in the state that studies infrastructure as a comprehensive system,” he said. “We hope to contribute to knowledge and decision-making regarding those critical aspects of the system, and translate them into action and public education.”

Campaign for a new Catholic Center

Cardinal Roger Mahony, archbishop of the Archdiocese of Los Angeles, and USC President Steven B. Sample joined over 225 USC students, administrators, alumni and community members in celebrating the kick-off of a $14 million campaign for a new Catholic Center to serve the university’s estimated 10,000 Catholic students.

In introducing Mahony, Sample noted, “The USC Catholic Center is poised on the threshold of significant change. This new initiative will serve both our campus community and our community at large.”

The new center will be built on the site of the current one, a block and a half off campus on University Avenue. It will house activity spaces, meeting rooms, study areas, offices and a kitchen, as well as a flexible rooftop entertainment space.

From Dream to Reality

More than 300 supporters of the Keck School of Medicine of USC gathered in November at a black-tie dinner, titled “Dreams to Reality,” to celebrate three years of success following the W.M. Keck Foundation’s $100 million naming gift. Keck School overseers Robert and Kelly Day hosted the event, which was attended by Keck School leadership, donors and other supporters of the school. In his opening remarks, Robert Day, who is also chairman and president of the W.M. Keck Foundation, commended the members of the Keck School Board of Overseers, Keck School Dean Stephen J. Ryan and USC President Steven B. Sample, for their outstanding leadership. Sample’s remarks included a campus-wide light show that drew attention to the many new facilities being constructed by USC and its partners, Tenet Healthcare and the County of Los Angeles. “Because of the support of many of you here and the extraordinary leadership of the W.M. Keck Foundation, Dean Ryan and the Board of Overseers, the Keck School of Medicine of USC is taking major steps to become a driving force in a pivotal period in history,” said Sample. Pictured from left are: Anne Ryan, Stephen Ryan, Robert Day, First AME Church pastor Cecil “Chip” Murray, Kelly Day, overseer Eli Broad, Steven Sample, Kathryn Sample, Cardinal Roger Mahony, Ellen Lee, overseer David Lee and “America’s Tenor,” NYPD officer Daniel Rodriguez, who performed at the event.

In October, Las Floristas presented a check for $325,000 to its Children Charities at Rancho Los Amigos National Medical Center, which is affiliated with the Keck School of Medicine of USC. Las Floristas members (left to right) Linda Bolton, Patricia Frandson and president Carolyn Johnson ‘62 presented the check to USC President Steven B. Sample during halftime at the Cal-USC football game.

Speaking Out on Terrorism

Town and Gown of USC launched its 2002-2003 speaker series in October with a presentation from Richard H. Dekmejian, professor in the USC College of Letters, Arts and Sciences and the USC Marshall School of Business. He spoke on “Terrorism and U.S. Foreign Policy,” relating the history of terrorism, both domestic and foreign, as it applies to the United States. Dekmejian has taught at USC since 1986.

A Gift in More Than Name