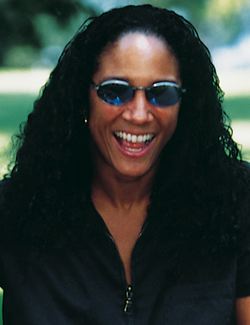 As a reserve forward on the 1983 and 1984 women’s NCAA championship basketball teams, 5-foot-8 Melissa Ward ’86 considered herself height-challenged. “I made up for it in leaping ability,” she says.

After graduation, she didn’t just leap, she soared – literally – first as a flight instructor in the Air Force, then as a pilot for United Airlines. Not exactly what you’d expect from someone who intended to become an accountant. But then, Ward never let intentions get in her way.

“I actually wanted to go to UCLA, but. I missed the deadline for the application,” confesses the Chicago native. “My brother said, ‘There’s a much better school on the other side of L.A.’” Impressed with USC’s academic standards, she applied and got in, armed with an Air Force ROTC scholarship and the knowledge she could bail out of ROTC after two years, with no further military commitment required.

Intentions flew out the window again when she joined the group’s drill team. A few orientation rides in jets sealed her fate. “It was so exhilarating,” she says. “And to realize you could have fun flying around and that was called work, I said, ‘Sign me up!’”

Ward’s first assignment out of college was a year of pilot training at Reese Air Force Base in Lubbock, Texas. The only woman in her class to graduate, she became the Air Force’s first African-American female flight instructor and spent four years training male students to operate the two-seater, 5000-pound T-37 jet (women weren’t allowed to fly in combat back then). “Your whole job,” she says, “was to teach this guy how to fly an aircraft safely without killing you.”

Alive and intact, Ward moved from active to reserve duty in 1992 and immediately went to work for United Airlines. A few years later, she resigned all her military commissions to concentrate on flying the friendly United skies. She’s currently the company’s “standards captain” – the one who administers the flying tests to the other pilots – and an on-call pilot. She is the first and only African-American female flight captain at a major commercial airline.

Ward first demonstrated her desire to excel while at USC, graduating in the top 100 of her class, with the highest GPA of any female athlete that year, and winning, among other honors, the Michael Garrett Award.

She also managed to pick up a few life lessons on the basketball court with teammates like Cheryl Miller and Cynthia Cooper. “What I learned playing on that team was that there’s a lot of important parts to every organization. It takes everyone’s effort to really make a success,” she says. “That lesson probably helped me have more success in my life later on.”

So did having a role model like her mom, a retired ob/gyn who started medical school at the age of 30 while raising three kids. “She always said, ‘Don’t ever let anyone tell you that you can’t do something that you can,’” says Ward, the mother of 3-year-old twin girls. “Not only did she say it, but she proved it.”