Trustee Ray R. Irani PhD ’57, executive chairman of Occidental Petroleum Corp. and namesake of the university’s Ray R. Irani Hall, was appointed the Judge Widney Professor of Chemical Engineering and Chemistry by USC provost and senior vice president for academic affairs Elizabeth Garrett on March 1.
Judge Robert Maclay Widney founded USC in 1880 and played an important role in the growth of Los Angeles as an urban center. Widney professorships are reserved for distinguished individuals appointed from the ranks of the arts, sciences, professions, business and community leaders. 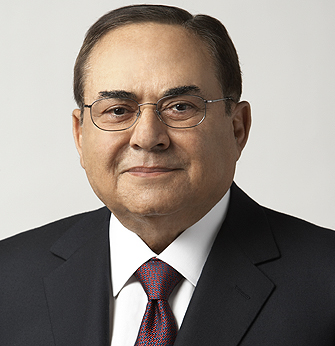 Ray Irani was named to the National Academy of Engineering.

Irani’s appointment is held at the USC Viterbi School of Engineering and the USC Dornsife College of Letters, Arts and Sciences, from which he received his doctorate in chemistry in 1957. He was named to the National Academy of Engineering in February.
“Ray Irani’s achievements as a business leader, innovator and USC trustee have transformed his field and inspired our academic community,” Garrett said. “His appointment advances our institution’s distinction in the physical and material sciences and equates his enterprising work with Robert Widney, whose values and vision helped to create this great university.”
USC Dornsife dean Howard Gillman added: “We are honored to have Ray Irani join our community of faculty scholars. His vast knowledge and achievements have established him as a world leader in energy studies, and this appointment acknowledges the critical role he has played in the advancement of science and engineering.”
Yannis C. Yortsos, dean of USC Viterbi, said: “Research advances in energy are of critical importance to the world’s future. We are excited to share Dr. Irani’s expertise in this area with our faculty and students.”
After serving as chairman and CEO from 1990 to 2011, Irani was named executive chairman of Occidental Petroleum last May. He has published more than 50 technical papers and holds more than 150 U.S. and foreign patents. He is the author of the book Particle Size and serves on the board of directors of the American Petroleum Institute, Wynn Resorts and The TCW Group Inc.
Irani is chairman of the Board Personnel Committee at USC. He also is co-chairman of the board of the American University of Beirut and a member of the board of governors of the Los Angeles World Affairs Council. He received the USC Alumni Association’s highest honor, the Asa V. Call Achievement Award, in 1997 and the 2003 Distinguished Alumni Award from the Department of Chemistry.

COMMENCEMENT 2022: The well-known names include leaders from the worlds of philanthropy, entertainment, sports and journalism.

The investor and USC alumnus has been a member of the Board of Councilors of the USC Dornsife College of Letters, Arts and Sciences for two decades.

Hughes and his family are the largest benefactors in the history of the university — with many of his gifts arriving anonymously.

Business leader Steve Keck named to the USC Board of Trustees

The USC alumnus has deep, long-standing connections to the university.