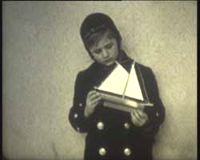 A examines a model of a ship he’s about to embark on.

Hungarian artist Péter Forgács and the Labyrinth Project at the USC Annenberg Center for Communication have teamed up to present “The Danube Exodus: The Rippling Currents of the River,” an interactive media experience that immerses viewers in the sights and sounds of Jewish and German refugees during World War II.

Visitors to the installation – on through Sept. 29 at the Getty Research Institute – use a touchscreen interface to navigate through three different, yet intersecting tales.

One story, set in 1939, tells of Eastern European Jews who, fleeing Nazi persecution, try to reach a ship that will transport them to a new home in Palestine. Another story tells of émigré Germans abandoning their adopted Bessarabian homeland in 1940 to return to Germany.

Both groups were transported along the Danube River by Captain Nándor Andrásovits – an adventurer and amateur filmmaker who documented these historic journeys and his own explorations of Central Europe. The third story recounts the captain’s experiences on the river.

The exhibition includes early 18th-century maps of the Danube River and drawings of the region from the special collections of the Research Library at the Getty Research Institute. The project was launched during Forgács’ residency at the institute in 2000-2001.

“The innovative and interdisciplinary approach of this exhibition is a powerful demonstration of the institute’s commitment to extending the boundaries of art and its historical meaning,” said Thomas Crow, director of the Getty Research Institute and a professor of modern European and American art in the USC College of Letters, Arts and Sciences. “’The Danube Exodus’ is a one-of-a-kind experience.”

The exhibition blends images and sounds of the past using technology from the present, said Elizabeth Daley, executive director of the Annenberg Center and dean of the School of Cinema-Television.

“Through this melding of old and new,” she said, “installation visitors from this century can glean a fascinating perspective on one of the most turbulent periods in the last century.”

“The Danube Exodus: The Rippling Currents of the River” springs from film footage shot over a half century ago by Andrásovits, captain of the Danube river steamer Erzsébet Királyné (Queen Elizabeth). Having originally crafted this “found footage” into an award-winning one-hour film for Dutch television, Forgács teamed up with the Labyrinth Project to transform the material into an immersive experience that compels viewers to compare what Forgács calls the “incomparable duet of the German-Jewish exodus.”

“Art is not what can be physically seen in the installation,” Forgács said. “Rather, art is that certain intangible thing that each visitor will see. Art is happening in the visitor’s mind.”

Through its use of touch-screen technology, the installation allows visitors to experience history as a stream of moments and memories that can always be understood in new ways, with each new intersection and reverberation made possible by shifting combinations of design, choice, and chance.

“What our interface designers found most challenging and exciting was the ongoing process of re-orchestrating the captain’s original footage – as it moved from one historic moment to another, with its meanings constantly changing and its narrative field constantly expanding,” said Marsha Kinder, the USC cinema professor who started the Labyrinth Project. The project has been producing interactive documentaries and electronic fictions in collaboration with independent artists since 1997.

“Visitors are drawn into this process not only by choosing what they see and hear, but also by bringing their own personal memories and associations to this haunting material,” she said.

The impact of the experience is augmented by an audio mix that includes ambient sounds of the river and harbor, the mechanical rhythms of ships’ engines, regional music from the period, songs and prayers of the refugees, voice-overs of the captain and his passengers, and the haunting minimalist music of composer Tibor Szemzö, who has collaborated with Forgács on all of his previous films.

For more information about the exhibition, go to www.annenberg.edu/labyrinth.