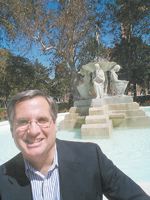 “The fountain had always meant a lot to all of us,” said Gerald S. Papazian, as a gathering place and landmark during their student years. Papazian and other late-1970s USC alumni funded the restoration.

“Youth Triumphant,” the ornate fountain at the heart of campus in Alumni Park between Bovard Hall and Doheny Memorial Library, has had its youth restored.

Conservation specialists John and Stefanie Griswold, of Griswold Conservation Associates, and their staff worked throughout the summer to mend the wounds time had inflicted on the work of sculptor Frederick William Schweigardt, who died in 1948.

Numerous inscriptions that have long been hidden by grime or incrustation can now be read, including the name of Edward L. Prentiss, the USC student to whose memory the fountain was dedicated in a November 1935 ceremony.

“The fountain had always meant a lot to all of us,” said Papazian, adding that it served as a gathering place and landmark during their student years.

Papazian, a past president of the USC Alumni Association and the president of the Skull and Dagger Society, heard about the renovation plans and talked to his friends. “We agreed on an amount,” he said, “and became the donors for the project.”

The task included a careful cleaning of the bronze dancing figure at the top of the fountain that gives the work its name. “There were lots of mineral deposits and some bronze disease,” said conservationist Griswold.

“The Four Cornerstones of Democracy,” the four cast concrete figures, also needed extensive work. “Home,” “Community,’ “Church” and “School” all had cracks and eroded areas that had to be carefully filled and cleaned.

The structure’s interior basin was smoothed and filled, and the copper plumbing that carries the fountain’s waters was completely replaced.

The work proceeded under museum conservation ethics, Griswold said. This means that the most badly eroded original inscriptions, including the artist’s signature, have been preserved intact as art historical evidence rather than re-cut.

“We do hope to find a way to make the more eroded areas more legible in the future, but this requires further study,” Griswold said.

The assistant director for engineering services, Rob Jamieson of Facilities Management, worked with the Griswold firm to restore the fountain.

The restoration is not the first the structure has undergone. A windstorm in 1976 caused damage that was repaired in 1979.

The restoration is a work in progress, Griswold said. “It has been restored,” he said, “but it will require maintenance.”

The president honors the Native American author, historian and war hero, whose legacy of fostering connections among cultures aligns with the purpose of the Center for International and Public Affairs.

It’s a historic act of atonement, as the university presents families from around the world diplomas in the names of Japanese American USC students who were forced into detention in 1942.

Niki Kawakami will be the fifth in her family to earn an advanced USC degree — but her grandfather was cheated of his during World War II. Eighty years later, a gap in justice is closing.