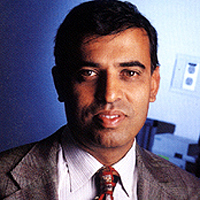 “We’ve come a long way in pancreatic surgery,” said Dilip Parekh, chief of tumor and endocrine surgery and professor of clinical surgery in the Keck School.

Dilip Parekh, chief of tumor and endocrine surgery and professor of clinical surgery in the Keck School, completed the laparoscopic operation at USC University Hospital in mid-July.

“We’ve come a long way in pancreatic surgery,” Parekh said. “Some 15 or 20 years ago � and even, to some extent, today � pancreas surgery was regarded as very dangerous. Before, patients did not do very well after pancreatic resection. Overall, surgery has become safer today. Because pancreas surgeries are so complicated, they are primarily done in specific centers with a high level of expertise, like ours.

“Our experience and record in using laparoscopy to perform distal pancreatectomies and complex Whipple procedures has enabled us to take laparoscopic pancreatic surgery to the next level,” he said.

Parekh’s patient had benign cystic neoplasms, or cyst-like growths, throughout her pancreas. Although such growths are often benign, they may become malignant. When the entire pancreas is involved, surgeons recommend complete removal of the fragile organ.

Patients can live without a pancreas as long as they take supplements of pancreatic enzymes and inject insulin.

Parekh and his colleagues accomplished the surgery through hand-access laparoscopy, which allows surgeons to use minimally invasive techniques while maintaining some of the hands-on feel of traditional surgery.

Laparoscopic surgery � known by some as keyhole surgery because it is performed through small slits or punctures in the skin instead of open incisions � means diminished post-operative pain, smaller scars, less risk of infection and quicker healing time.

To perform such operations, surgeons must insert a tiny fiber-optic camera into the abdomen, then cut and suture with long-handled instruments inserted through ports in the skin while watching their work magnified on a video screen.

Parekh first began performing distal pancreatectomies laparoscopically in the late 1990s. In those procedures, surgeons remove the tail end of the pancreas.

“We did well with those, so we moved on to the Whipple procedure,” he said. The Whipple involves the other end of the pancreas and is more complex because it involves reconnecting numerous ducts and organs to the small intestine.

In 2001, Parekh became the first in the nation to perform the Whipple procedure with hand-access laparoscopy. In this relatively new technique, surgeons make a small incision in the abdomen and snap a specially designed plastic ring into place within the incision.

That is important because before surgeons can operate on the abdomen laparoscopically, they must inflate it with carbon dioxide gas to better separate and visualize the organs. Any unsealed openings in the abdomen allow gas to leak out.

“To do this procedure, we basically combined the techniques that we had previously developed for laparoscopic distal pancreatectomy and Whipple operations,” Parekh said.

While a laparoscopic distal pancreatectomy usually takes one-and-a-half hours, and a laparoscopic Whipple procedure usually takes about six hours, the pancreatectomy surgery took six-and-a-half hours � about the same time it would take to perform the procedure using open techniques. But unlike in an open procedure, the patient was spared a long horizontal incision below the ribcage and through muscle, Parekh noted.

Much of the pain involved in recovery after surgery happens because of slicing through muscle, he said, so laparoscopic procedures that avoid those long incisions typically mean reduced post-operative pain�and less use of narcotic drugs.

Data on such procedures is scarce because so few surgeons perform them. But comparisons between open and laparoscopic distal pancreatectomies are illuminating.

When the procedures are performed using open techniques, patients typically stay in the hospital for five to eight days after surgery and take six weeks to recover. They usually need drugs such as morphine for three to four days after the procedure.

In the more than four dozen laparoscopic distal pancreatectomies Parekh’s team has performed at USC, however, patients typically stay in the hospital for one to three days, need narcotic medications for one day and are able to return to work in two to three weeks, he said.

Parekh is hopeful that the less-invasive procedures will eventually ease the gastrointestinal problems that patients usually have after the abdominal surgeries, including gastroparesis � the slowing or stoppage of food’s movement through the stomach.

Appropriate patients for laparoscopic total pancreatectomy are those who have tumors in several areas of the pancreas. These patients usually have neuroendocrine tumors, rather than adenocarcinoma � the type of tumor most often associated with pancreatic cancer.

The surgery also may be used preventively in a small group of patients who show a strong family history of pancreatic cancer and have a genetic predisposition to the disease. In addition, people suffering from chronic pancreatitis may be considered for the procedure as a way to alleviate pain.

For information about the procedure, call Parekh’s office at (323) 442-5837 or visit the USC Center for Pancreatic and Biliary Diseases’ Web site at http://www.pancreasdiseases.com