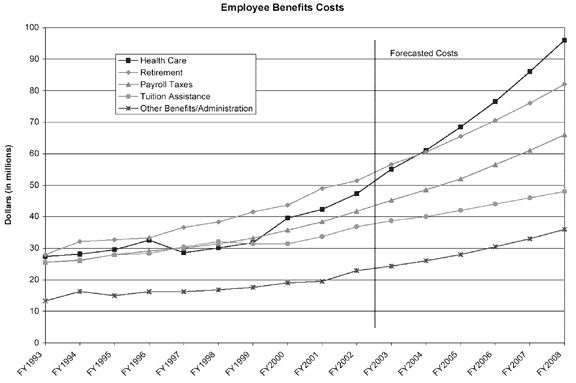 The chart above compares the rise in costs of benefits programs, and projected future costs. The projected rise in health-care benefits costs is significant.

Health care costs are soaring nationwide, resulting in a rise in premiums, as well as the share employees pay.

USC, with its 10,000 benefits-eligible employees, is not immune to the rise in health-care costs. The university will experience double-digit health-care premium increases in 2003, and it will have to pass on part of these increases to faculty and staff.

Ten years ago, Cooper said, these four cost categories were more than 90 percent of total cost and were almost equally weighted.

USC’s employee benefits rate, the percentage of salaries paid by schools and departments to cover all benefits-eligible employees, is currently 33 percent.

If benefits costs cannot ultimately be controlled, added Cooper, the benefits rate will have to increase to cover the higher costs. This, in turn, will limit the resources available to fund annual merit-pool increases.

In the early- to mid-1990s, the economy was good, workers were in short supply, managed care had reduced prices and hospital admissions, medical cost increases were moderate, and employers were able and willing to shoulder the lion’s share of health-care costs.

Now, however, the tide has shifted and employers nationally are faced with ever-increasing health-care premiums. In 2000, employers were hit with the largest premium increases in a decade (7.2 percent according to a Sept. 6 Los Angeles Times story), and premiums have continued to rise since then.

This trend is noteworthy, said Lisa Macchia, director of health plans, because, according to the Sept. 6 Los Angeles Times story, the trend is spread uniformly across regions, industries, types of insurance and even sizes of businesses. As further proof of the pervasiveness of these increases, said Macchia, the second largest purchaser of health insurance in the United States—CalPers, which is generally recognized as the bellwether for things to come both in California and in the nation—settled on 25 percent increases for its HMO plans and 19- to 22-percent increases for its PPO plans for 2003.

While USC does not yet have final premium-increase figures for all USC health plans, said Macchia, it is certain that premiums will go up.

In addition to premium increases, the percentage of employee contributions will also increase, Macchia said. In the past, USC has paid 85 percent of the cost of each health plan, with employees paying 15 percent. In 2003, this will rise to 17 percent.

“The fact is, however, that a 17 percent employee contribution is still extremely low,” said Macchia, “especially for spousal/mutual financial dependent and family coverage. In many plans—both in academia and business—an employee pays 15 to 20 percent for single coverage.” And, according to a recent issue of Consumer Reports, employees nationwide pay an average of 27 percent of the cost of family coverage.

There are steps, however, that can be taken to prepare for premium increases, said Macchia.”Consider the value health insurance brings to you.”

All employees will receive a booklet outlining specific benefit changes through campus mail. “When you receive your open enrollment materials,” Macchia said, “study them carefully.” She suggested that employees make a list of health-care-related items they paid for out-of-pocket last year, such as prescription drug co-payments, and whether these were for generic or brand-name drugs. She also said to take a look at what was paid for visits to physicians, such as office visit co-payments (HMO plans), and deductible expenses and co-insurance (USC Network Plan).

“And think about whether it would be to your advantage to set up a pre-tax payment account for health expenses,” said Macchia.

In choosing a plan—or changing to a different plan – employees should consider personal preferences: Is it important to be able to consult directly with a specialist, or have the ability to select a specific physician, hospital or other provider? In addition, if a spouse or partner has coverage through a different employer, employees should take the time to evaluate options at USC and with another employer.

A benefits fair, where employees can obtain more information and talk to plan representatives, is scheduled for Nov. 7 from 10 a.m. to 3 p.m. at the Health Sciences Campus quad.

The open-enrollment period, which runs from Friday, Nov. 1 through Saturday, Nov. 30, is the only time benefits-eligible employees can change coverage for the calendar year 2003.