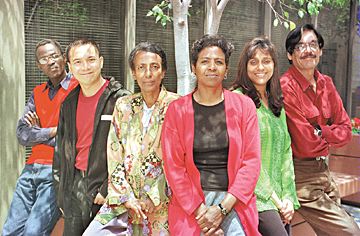 At USC last summer to learn to make soap operas with social content were (from left) Kayode Egbeleye, a veteran scriptwriter, cinematographer and director from Nigeria; Jomar Fleras, the head of a Manila nonprofit organization concerned with reproductive health, who has produced award-winning documentaries and public information spots for Filipino television; Sergut Asfaw, a 20-year veteran of woman’s programming on Ethiopian radio; Maryam Al-Tayib Al-Mubarak, a former producer of documentaries, dramas and public information spots for public television in Sudan who now works for UNICEF; Roma Pereira, a corporate consultant whose family produced an Indian soap opera for social change; and Farooq Syed Qaisar, a Pakistani puppeteer with a popular television program.

Over the past 23 years, Farooq Syed Qaisar’s quirky and loveable puppets have become as familiar to television viewers in Pakistan as Sesame Street’s Ernie or Miss Piggy are in America.

So Qaisar is something of an expert when it comes to the pressures of producing a weekly television show. But he still broke out in a sweat when assigned to shoot the first film of his life on the first day of a unique educational program held this summer at USC.

“I couldn’t believe it,” said the veteran puppeteer, who is considered his country’s answer to the late American puppeteer Jim Henson.

Along with five other mid-career media professionals, Qaisar rose to the challenge in the hopes of mastering an unusual skill: making soap operas as vehicles for social change.

THE SIX WERE participating in a 13-week workshop conducted by the Population Research Laboratory, the School of Cinema-Television and the Annenberg School for Communication, with support from the Packard Foundation and Population Communications International, a nonprofit organization that encourages development of social content programming on radio and television.

The sponsoring units planned to evaluate this fall whether to repeat the program in the future.

“Research has shown that soap operas can be highly successful in getting people to embrace family planning and human rights and to combat domestic violence or HIV-AIDS,” said David Heer, a professor of sociology and the principal investigator for the educational project. “The hope is that these students learn enough about TV and communications so they can have an effect on public policy issues in their countries.”

The fellows all hailed from the developing world, including Quasir and Roma Pereira, a corporate communications consultant from India. Back home, their countries are enemies, but at USC, the Pakistani puppeteer and the Indian “perceptions management” expert lived in the same student housing complex and even collaborated on homework assignments.

Doe Mayer, another project organizer and the Mary Pickford Professor of Film and Television Production, knew of no other American campus with a similar program for foreign communicators.

“It’s really great that USC could be involved in something like this,” said Mayer, who acts as a consultant on social content programming in developing countries.

USC was able to conduct the workshop because of the strength of the university’s School of Cinema-Television, Population Research Lab and Annenberg School for Communication, organizers said.

“To put a program like this on successfully you need a lot of different talents,” said Peter Clarke, another project organizer and professor of communication and preventive medicine.

POPULATION COMMUNICATIONS International, a nonprofit organization that encourages development of social content programming on radio and TV, selected participants and arranged a lecture series for the fellows. The six participants, who were selected on the basis of their track record in media and their potential for making contributions in socially responsible programming, all came from countries where PCI has either launched programming or is considering doing so, including Ethiopia, Sudan, Nigeria and the Philippines.

A Packard Foundation grant covered all tuition and travel costs, plus a stipend for each fellow. The program also picked up expenses during a weeklong trip to New York City, where fellows met with officials at the United Nations and other international agencies focusing on population stabilization.

The effects were visible just three weeks into the program.

Although Pereira’s family helped produce a 52-episode 1992-1993 soap opera that explored the status of women’s issues in India, she had never used a movie camera professionally before coming to USC. Even for her relative inexperience, she was winning raves from her classmates by her third project – a touching exploration of the bonds between fathers and their daughters.

An American classmate in the “Beginning Production Sequence” course that the fellows took at the School of Cinema-Television was so moved by the piece that he raised his hand to comment but had to pass when he started to cry.

Qaisar was already convinced that he had learned enough filmmaking skills to be able to chronicle the activities of a touring version of his puppet theater, which brings health and family planning tips to rural Pakistan with the support of UNICEF.

Despite the popularity of his prime-time Saturday night comedy “Surgam Time” and “Surgam Surgam,” Qaisar said he has never been able to find sponsors willing to underwrite the cost of hiring a professional film crew to document the performances that are given in Urdu, the official language of Pakistan, and three regional languages. By shooting and editing the footage himself – and training fellow puppeteers to pitch in – Qaisar said he would be able to slash the production budget to an easily funded level.

SOAP OPERAS, despite their reputation for silliness in this country, have an established track record abroad for changing public opinion. Mexico launched the first soap operas exploring family planning issues in the early 1980s, Mayer said. Since PCI’s founding in 1985, it has been instrumental in developing message-based TV or radio soaps in 10 countries, from China – where valuing females was one theme – to Tanzania, where AIDS prevention was the goal.

“As part of a campaign, soap operas have been a very effective piece of the puzzle,” Mayer said. “People connect emotionally to these characters. They want to know what’s happening to them, and so they tune in.”