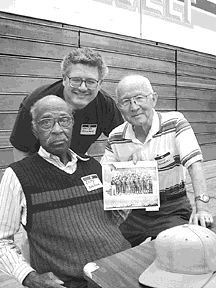 From left, Atoy Wilson, George Sanchez, professor of history, and Dan Kawahara. Wilson holds a photograph of the 1937 Roosevelt High School baseball team, the Rough Riders — which he, as catcher, and Kawahara, as centerfielder, played on. The teammates have remained friends.

The photograph had languished for years in a drawer at Tomiko Nakayama’s Monterey Park home.

But at a recent event that USC helped organize at Roosevelt High School in Boyle Heights, near the Health Sciences Campus, the 61-year-old shot of the retired seamstress caused quite a stir.

There was the strikingly beautiful 17-year-old, wearing a silk kimono sent all the way to her parents’ Boyle Heights home from Japan by an aunt. Beneath her feet rose the arching bridge that straddled a pond in a formal Japanese tea garden that once graced the high school’s grounds. After World War II, vandals demolished the garden, but the school rebuilt it four years ago, albeit with a smaller version of the storied bridge.

“Wow, this is some bridge,” said Dan Gebler, a USC graduate student in history. “I’ve never seen a picture of this garden.”

Such were the thrills of excavating the past at the Boyle Heights “Photo Duplication Day” April 29 and 30, manned by USC graduate and undergraduate students in conjunction with a citywide coalition of researchers.

“They’re wonderful – just wonderful,” Gebler said of the photos. “They give you a real sense of history.”

The results will serve as the foundation of an exhibit on the community at the Japanese-American National Museum in late 2001 or early 2002.

The findings will also figure in “Re-Examining Boyle Heights, Making Community: Multiethnic Interpretations of Neighborhood Life” by George Sanchez, a USC history professor helping to organize the photo-collection project. They also will become available on a USC Web site, www.usc.edu/schools/sppd/scw/index.html, as part of the ongoing Southern California in the World (SC/W) exposition.

“Over the years, the neighborhood east of downtown has attracted considerable numbers of African, Armenian, Greek, Japanese, Jewish, Mexican, ‘White Russian’ and Russian Molokan immigrants,” Sanchez said. “It is Los Angeles’ Lower East Side – the first home for newcomers to the U.S. and Los Angeles.”

For such graduate students as Gebler, the exercise provided an opportunity to rub elbows with the likes of Manny Zelman, whose family until last year ran a Boyle Heights clothing shop for three generations.

“He’s one of the legends of the neighborhood,” said Gebler, who is devoting his doctoral dissertation to the history of Boyle Heights’ Jewish community.

Meanwhile, undergraduates like Carina Zaragoza, who studied Mexican-American history last spring with Sanchez, got a hands-on lesson in history gathering.

After a researcher from the Japanese-American National Museum provided an initial screening of the hundreds of entries, Zaragoza and about 10 other undergraduates gathered such basic information about the photos as the names of human subjects, the date when they were taken and the location, including any important landmarks. Along with such graduate students as Gebler, the undergraduates also had the responsibility of deciding which photos to include in the repository and which to omit. A professional crew of photographers then shot the select few images for the permanent collections of the JANM, Jewish Historical Society and SC/W.

“It was so interesting to hear all the stories,” said Zaragoza, an American studies major. “The experience really confirmed my interest in American studies and made me want to pursue this kind of thing at graduate school.”

“I take for granted that Boyle Heights is the way it is now,” she said. “I learned that it’s gone through many changes.”

But even epiphanies involve tough choices, Zaragoza learned. Just a few hours into the Saturday proceedings, she found herself in the position of having to firmly but politely exclude the treasured photo of one of the event’s participants: Hermalinda Nieto’s circa 1938 photo of herself at 3 astride a horse in front of her grandfather’s Boyle Heights home. In the photo that was taken by an itinerant photographer, Nieto is wearing a cute ranchero costume and a grin.

“Pictures of a kid on a horse are really popular,” Zaragoza explained. “We don’t need another one.”

Long before the term “multicultural” became popular, Boyle Heights in general – and Roosevelt High in particular – was a melting pot, Sanchez said.

“We’re looking for photos that give you some sense of ethnic interaction and activities,” he said.

Researchers were thrilled not just with Nakayama’s snapshot of the Japanese Tea Garden, but also one that showed her and three girlfriends in kimonos.

“It’s International Day,” she said, referring to a long-standing tradition at the school to honor the different cultures represented in the student body with a day of special activities. While common today, such celebrations of diversity were rare in that era, researchers noted.

“See that person bending?” she asked, referring to a blur on the image’s right side. “That’s a [girl in a] Mexican costume.”

Researchers were also ex cited to discover Atoy Wilson, a retired park superintendent now living in Victorville, and Dan Kawahara, a retired owner and operator of a bindery now living in Rowland Heights. Members of the Class of 1937, they had played on the same baseball team and remained friends.

“You’re not from the major leagues, are you?” joked Kawahara, when asked about the team’s photograph.

The African-American catcher and Japanese-American centerfielder had played with Joe Gonzalez, a Mexican-American who eventually signed with the Red Sox.

“The Rough Riders had many Mexican-Americans, a black, a Russian, a Jewish fella and two Japanese-Americans like myself,” Kawahara said. “We were as multiethnic as you can get, but we all played like we were one family.”