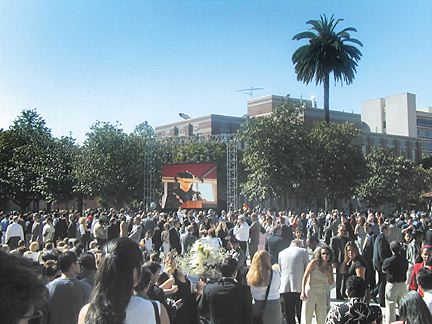 Two giant-screen Jumbotrons give viewers at the edges and rear of the crowd a close-up view of commencement speakers.

In the first commencement of the new millennium, USC’s Class of 2000 was exhorted to rise to the challenge of 21st century technology as well as to the timeless challenges of the human heart.

From main speaker Michael D. Eisner, who warned of the perils of e-mail, to satellite ceremony speakers like Anita Bock, who told social work graduates that their most important quality was the “ability to love,” a host of experts, sages and celebrities made sure that 8,600 new graduates left campus on Friday, May 12, with plenty to think about.

When they weren’t listening to speeches, the graduates were taking final pictures in front of Tommy Trojan, adjusting headgear and flower leis and toasting the future with family and friends.

New at this year’s ceremony were two giant-screen televisions to help all of the audience of 35,000 see the action at the speakers’ platform in front of Doheny Memorial Library. As usual, the annual ceremony came off flawlessly, despite an ongoing $10.5 million library renovation that framed the platform with construction scaffolding.

President Steven B. Sample was the first of several speakers to note the significance of the Class of 2000’s graduating from Time magazine’s College of the Year 2000.

Pointing out that the Time award recognized the achievements of USC student volunteers in the surrounding neighborhoods, Sample told the graduates: “I encourage all of you to take part in public service throughout your lives, extending USC’s great legacy of public service across the nation.”

In his speech, valedictorian Jacob M. Chacko talked about his own experience as a volunteer at Vermont Elementary School. “Our work in the community has taught us that success must be shared, and climbing the ivory tower is meaningless if we do not bring others with us,” he said.

Chacko advised his fellow graduates to embrace uncertainty, take risks and “continue to look for learning in the most unexpected places.”

Eisner, chairman and CEO of the Walt Disney Co., told graduates to use their skills and wisdom to “elevate e-mail in the 21st century.”

Inspired by a close encounter with the computer virus dubbed the Love Bug – “a flagrant rip-off of the title of a Disney film,” he joked – Eisner said that one of the biggest threats to both the public and private sector is careless and misunderstood e-mail.

E-mail’s speed and ease make it “easy to be rude, easy to use language incorrectly, easy to make stupid mistakes, easy to do irreparable harm,” he said. “I have come to believe that if anything will bring about the downfall of a company or maybe a country, it is blind copies of e-mails that should never have been sent in the first place.”

In his opening remarks, Sample introduced the first winners of USC’s $10,000 Renaissance Scholar Prize, which rewards undergraduates who take on two or more widely separated fields of study – “what we at USC like to call breadth with depth,” he said. The 14 winners included valedictorian Chacko and the salutatorian, Jenny Yiee.

At the end of the main ceremony, Sample formally conferred bachelor’s, master’s and doctoral degrees, which were then awarded individually at separate school satellite ceremonies that followed.

Some graduates chose to lighten the occasion with creative additions to their mortarboards. At least one mortarboard was topped by Mickey Mouse ears in homage to Eisner.

Then there was Ahmad Mizban, receiving a B.A. in business administration, who had spent about an hour covering his headgear with green brocade and gold fringe. It made him feel like a “coffee table,” he said. “Someone asked whether this was an honor society hat, and I said, ‘No, I’m in the Class Clown Society.’”

Jennie Kling, picking up a B.S. in nursing, doled out about 20 flower leis to graduating friends. “My daughter went to the flower market early yesterday and bought bags full of carnations,” said Jennie’s mother, Mimi Kling. “She stayed up late last night, but she wasn’t tired. She was filled with enthusiasm and energy for the day. We’re so thrilled and proud of her.”

Kling’s nursing classmate, Katrina Woolfolk, a single mother of two, had much to celebrate as well. While juggling two jobs, she managed to complete a B.S. with honors. “I love nursing,” Woolfolk said. “I love helping, I love caring. That’s my calling.”

At the School of Journalism’s satellite ceremony, Sarah Reinertsen, receiving a master’s in broadcast journalism, presented awards to outstanding faculty members while receiving one herself: the Simon T Award for Excellence in Broadcast Journalism.

Reinertsen – nominated by journalism faculty for the award – didn’t pause to catch her breath after graduation. She left May 17 for Europe, where she is helping coordinate an international communication studies program. In June, Reinertsen will be back in the United States for the national Paralympic trials for disabled athletes.

Reinertsen, whose left leg was amputated when she was 7, wears a prosthesis and holds a world record in the marathon for female amputees.

At the journalism ceremony, Reinertsen and other graduates heard radio dramatist and instructor Norman Corwin urge them to use their craft to communicate the drama of life.

“Journalism, without any symbolic oaths, and notwithstanding its many lapses and left turns, has a stubborn conscience – and when it’s aroused, it’s beautiful,” Corwin said.

Comments from other speakers at satellite ceremonies included:

• “If there is one truth that’s universal, it is the truth that love can change the universe.” – Anita Bock, director of the Los Angeles County Department of Children and Family Services, speaking at the School of Social Work ceremonies.

• “Real and tangible success comes to those who follow their hearts, as well as their minds. Finding that thing which you are passionate about above all else and pursuing that activity which you love to do – these are the keys that unlock every door.” – David Bohnett, USC alumnus and founder of Geocities, at the Marshall School of Business undergraduate ceremony.

• “I challenge you to live up to your leadership potential: to stick with it, to pull one another along, to believe in children and your ability to teach and help them, and most of all to go where you are needed.” – Ramon Cortines, interim superintendent of the Los Angeles Unified School District, at the Rossier School of Education ceremony.

• “Your task is to distinguish yourself from the rest of the pack, and don’t be ashamed to go into your bag of tricks. For example, find a place to take a really nice, healthy pause, to just do some faulty timing … They’ll think, ‘He’s either spaced out or he’s brilliant.’” – John Ritter, actor and USC alumnus, at School of Theatre ceremony.

USC Class of 2000 Celebrates a Milestone With Pageantry and Purpose