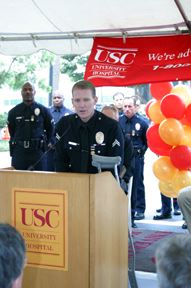 Los Angeles Police Chief Martin H. Pomeroy and dozens of LAPD officers gathered in front of USC University Hospital on Oct. 17 to thank and recognize the medical team credited with helping save the life of a severely injured officer.

The officer—Bruce Hunt, a 14-year LAPD veteran and member of the SWAT team—was on hand for the event, using crutches to approach the podium to personally thank a multi-disciplinary hospital team that included Bradley Roth, Randy Sherman, John Itamura, Jackson Lee, Glenn Ehresmann and Paul Penoliar.

Hunt, who was awarded a Medal of Valor in 1997, was injured while off duty when he stopped to assist the victim of a car accident on June 30. After he stopped, a motorist failed to notice the slowing traffic and caused a chain-reaction collision that left the officer crushed and pinned between two cars.

Hunt was rushed to Providence Holy Cross Medical Center in Mission Hills, where he was stabilized, but the severity of his injuries required him to be transferred to the specialized trauma unit at USC University Hospital.

The battle to save Hunt’s life included a series of complex surgical and other procedures to stop internal bleeding and repair severe trauma to his chest, pelvis, and legs.

Still, the medical team succeeded and Hunt’s doctors are now optimistic about his continued recovery and long-term prognosis.