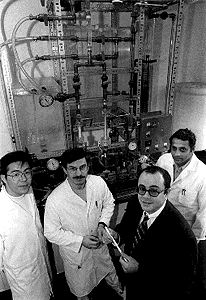 Environmental engineer Mike Pirbazari and research team members with their hybrid water-purifying instrument – the BAPC reactor. Pirbazari: “Hybrid biological treatment technologies are a desirable alternative because they actually destroy the contaminants. They might even be less expensive.” Shown here, from left, are Jesse Tu, Badri Badriyha, Pirbazari and Varadarajan Ravindran.

The problem: gasoline and other toxic chemicals in groundwater.
The solution: a new hybrid system that uses microbes and state-of-the-art filters to destroy contaminants.

USC researchers have developed a biological treatment process to remove gasoline and other toxic wastes from the groundwater that feeds the taps of millions of Americans.

“Groundwater can no longer be considered an inherently pristine source of drinking water,” said environmental engineer Mike Pirbazari, leader of the research team. “Spills and leaks from underground storage tanks and pipelines are releasing substantial quantities of potentially dangerous substances from fuels and other chemicals into the water table. As large populations are dependent on groundwater resources for potable water supply, degradation in quality of subsurface water reserves has serious public health implications.”

Southern California is among the many areas worldwide where such toxins are finding their way into well water.

Pirbazari and his students at the School of Engineering’s Water Quality Research Laboratories are combating this environmental threat by feeding the gasoline and other toxic wastes to special bacteria.

Instead of transferring dangerous contaminants from one part of the environment to another (as other remediation techniques do), USC’s new “hybrid MF-BAPC process” combines two well-known techniques to actually destroy them.

The contaminated water first enters a “reactor” of biologically active powder carbon (BAPC), where a special culture of toxin-eating bacteria breaks down the wastes and converts them to harmless substances. The reactor captures cancer-causing benzene, ethylbenzene, toluene and xylenes – collectively known as BTEX contaminants – and allows the toxin-eating bacteria to break them down. In addition, the carbon in the BAPC reactor catches and holds particles and impurities that would otherwise clog the filter through which the partially purified water then passes.

The cross-flow membrane filter (MF), made of a special synthetic fiber supported by a porous medium, then removes bacteria, viruses and other suspended impurities – producing an output stream of high-quality water.

To keep the reactor working at top efficiency, the membrane filter retains the beneficial bacteria and the toxic-chemical-destroying compounds they produce.

“Together, the two techniques work far more efficiently than either technique would work by itself,” Pirbazari said. “To combine the two techniques and make them work effectively, we had to do a lot of research on what causes membrane filters to clog and the best way to avoid such clogging.”

One obvious key to keeping the system free-flowing was to circulate the fluid vigorously, encouraging local eddies to form and thereby preventing the buildup of material at the filter. Beyond this, Pirbazari and his students used electron microscopes to examine fouled membrane filters to determine exactly how the clogging took place, what materials were causing it, and how best to keep each individual clog-producing component under control.

So far, the hybrid technology has been demonstrated on the “mini-pilot” scale. Pirbazari hopes to demonstrate it soon in a full-pilot installation.

Two of the remediation techniques most widely used now involve spraying contaminated water into the air to evaporate the toxic components and absorbing groundwater contaminants with granular activated carbon. But those techniques simply transfer the contaminants from the water to the air or to a toxic dump site.

“Hybrid biological treatment technologies are a desirable alternative because they actually destroy the contaminants,” Pirbazari said. “They might even be less expensive.”

Pirbazari is professor and associate chair of civil engineering in the School of Engineering and associate director of the school’s Environmental Engineering Program. Graduate students working with him included Badri Badriyha, Mark D. Williams, Varadarajan Ravindran and Jesse Tu. The research was partially supported by the Zumberge Research Innovation Fund.

Results of the USC study on the MF-BAPC process and its use for the treatment of gasoline-contaminated water were presented at the annual meeting of the American Institute of Chemical Engineers, held Nov. 13-18 in San Francisco. Further developments will be presented at the American Water Works Association’s Conference on Membrane Technology in Reno in August.

Bacteria that purify water rather than pollute water