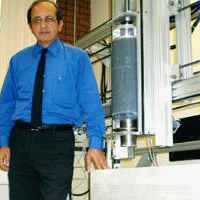 Behrokh Khoshnevis has been developing his automated house-building process, called “Contour Crafting,” for more than a year.

Degussa AG, one of the world’s largest manufacturers and suppliers of construction materials, will collaborate in the development of a USC computer-controlled system designed to automatically “print out” full-size houses in hours.

Funded by a grant from the National Science Foundation, Behrokh Khoshnevis of the USC Viterbi School of Engineering’s Information Sciences Institute has been developing his automated house-building process, called “Contour Crafting,” for more than a year.

Khoshnevis believes his system will be able to construct a full-size, 2,000- square-foot house with utilities embedded in 24 hours. He now has a working machine that can build full-scale walls and is hoping to actually construct his first house in early 2005.

Contour Crafting uses crane- or gantry-mounted nozzles, from which building material – concrete, in the prototype now operating in his laboratory – comes out at a constant rate.

Moveable trowels surrounding the nozzle mold the concrete into the desired shape, as the nozzle moves over the work.

Khoshnevis demonstrated the idea to Degussa executives at a meeting at the firm’s D�sseldorf headquarters.

The demonstration was deemed “impressive” by Gerhard Albrecht, head of divisional research and technology transfer for Admixture, a Degussa specialty materials subsidiary.

“It is our belief that your [Contour Crafting] concept will be a quantum leap in modern construction industry,” wrote Albrecht, in a subsequent letter. “Therefore, we are ready to do research in our own Degussa R&D departments to develop and provide construction materials that are serviceable and fitted for the special building conditions of the CC technology.

“Degussa not only has at its disposal a wide range of construction chemicals which will be tested with regard to their qualification and applicability for special CC cement formulations, but is also ready to develop special new construction chemicals in our own R&D labs fitted for the CC process,” Albrecht continued.

Khoshnevis is now perfecting a system to mix such materials continuously in industrial quantities right at the Contour Crafting nozzle, “the way a spider makes silk to build a web.”

“No company in the world is better able to bridge the gap between engineering idea and commercial practice than Degussa,” Khoshnevis said. “With their help, I believe I will be able to show the world an instant house early next year.”