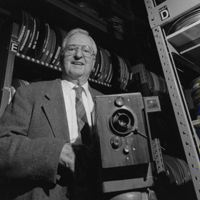 Each year, thousands of students file into USC’s Frank Sinatra Hall where they are immersed in the history and lore of cinema.

Basking in the glow of classics ranging from Buster Keaton’s “The General” to George Lucas’ “Star Wars,” few of them realize that right beneath their feet in the basement of the Norris Theatre Complex lies a vast collection of films and equipment that chronicles the power of sound and image from its earliest roots to the present day.

“The archives are essential to give perspective,” said Professor Emeritus Herb Farmer, who oversees the mechanical holdings of the USC School of Cinema-Television Moving Image Archive.

Dressed in a wool sweater to stave off the chill of the climate-controlled 62-degree chamber, the avuncular Farmer displays a keen passion for the technology that has brought cinema to life for over a century.

Passing through corridors and holding rooms brimming with projectors, cameras, recording equipment and sound mixers, Farmer is quick to underscore what he sees as one of the main reasons for amassing such holdings.

“I want to be sure that people don’t forget that everything that is produced is dependent upon the relationship with technology,” he said.

With a flick of a switch, Farmer brings up the display rack lights, illuminating hundreds of items from the collection, all neatly arrayed on long shelves in chronological order.

Primitive magic lanterns from the 1800s and kerosene darkroom lamps recall the early days. A bit further up the corridor, visitors see samples from the first years of motion pictures, including rare camera models such as the Bell & Howell #3 (1906) and Simplex #26 (1904-1906).

Objects on display range in size from a palm-sized 3-mm camera to a massive 600-pound theater projector.

The collection even contains the Bell & Howell camera that Farmer — a USC alumnus who earned a bachelor’s degree in 1942 and a master’s degree in 1955 — used as a student to shoot newsreels and other projects, and then later as an instructor.

Farmer’s camera, like dozens of other objects throughout the basement, are now on display at the David L. Wolper Center in Doheny Memorial Library as part of a special historical exhibit celebrating the school’s 75th anniversary.

Among Farmer’s current tasks are preserving the equipment, some of which is in mint condition, and determining when other items are useful for spare parts.

“I don’t try to make them work,” Farmer said. “I try to get them in the condition they were in when they were last used.”

Cataloguing the holdings is another important function. Working with student assistance, Farmer has photographed, indexed and entered more than a thousand objects into the archive database. He estimates that figure represents about half of the technological collection.

Beyond preserving the machines that created cinematic history, the archive also houses nearly 60,000 reels, according to archive curator Valarie Schwan. Many of those films came from private and commercial donors who sought a repository where the productions would be available for performances, education and research.

The cache also contains some 3,400 student films, the earliest of which dates back to 1929, the year the cinema program began at USC.

For Schwan, the value of archiving student films plays out on several levels. Each film gives a glimpse of how young filmmakers think at a specific age, as well as in a specific age. The archive captures views these artists may never again have as they get older and the social climate changes.

“Student films,” Schwan said, “are some of the most ‘dear-of-heart’ films that you’re going to find.”